Some days... you're not on your game

So Sunday afternoon brew session.  Shouldn't have thrown us off our game.  But it did some how.  But take heart sports fans... this is not a story of defeat,  but of triumph in the face of mediocrity.  Heck, even the great George Brett struck out some times.  But today, today was not our day to fail, just our day to stumble rounding third but still make it home safe.  (like the baseball analogy? I'm still geeked up about the Royals winning the World Series). 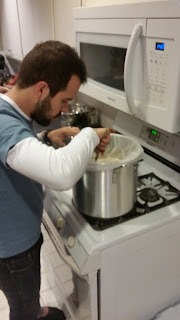 The brew day started  at 4 in the afternoon.  And we were admittedly rushed.  The guys were returning from watching their alma mater advance in the D2 soccer playoffs.  I, as you all know by now, am just kinda an idiot.   So unlike other days, we weren't prepared in advance.  Which I think is a key thing to note.   Our hobby takes some preparation.  But still we mashed in just fine, and used our usual methodology of tasting our mash and testing for conversion.  I think the mash was done in about 43 minutes.  We stop mashing when an iodine test confirms the mash is complete, and when we taste that nutty melanoidal flavor.

Today, just to teach about it we focused on brewing water calculations and sparging.  Not water chemistry, that may come later.  But honestly the water at John's house rules for hoppy beers, and the water at my house rules for malty beers so... we're very lucky.    We added sparging to the mix this week.  And we learned that the total volume of water is roughly the same.  I think it is fair to say everyone prefers no sparge BIAB. 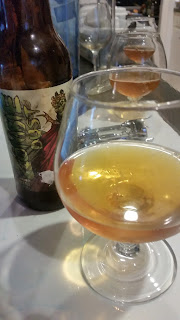 The boil was uneventful.    The Sierra Nevada Pale ale clone was first up, and it will be spot on.  We overshot our freaking OG again.  But this time only by 2 points.   I've made that recipe many times, and it is always damn good.    We sampled our Zombie Dust side by side with the real thing... and as you might expect... our tasted better to me.   This happens a lot with super hoppy beers.

The troubles came when we partigyled off of the main batch.  We added grains to our original grains and mashed in a beer cooler with no valve.   And that is where the fun began.  We ended up using an autosyphon to transfer out, because those things are hard to pour out of, just ask John if you don't believe me.    But after that the remainder of the brew day was just fine.   The second batch was supposed to be a red imperial ale... It ended up kinda orange.   We could adjust color at bottling, but I think we'll just let it go.  It is a partigyle batch after all.    We hit our OG of 1.090 and we pitched onto the US05 yeast cake from the Zombie Dust.  There should be more than enough yeast to handle this beer.   Plus John and MA aerated the bejeezers out of it.