So it is January.  A new year.   Last year I wrote 100 blog entries.  And I just reviewed many of them.  And after this soul searching, self reflective, journey of discovery, I can tell you now what I believe about home brew... not some pedantic, pedestrian  statement about home brew... like  "home brew rox!" or "home brew is totally bitchin".   But also not some altruistic crap about "home brew has a place for everyone" or "whatever your passion you'll find room for it in home brew..."  Nothing as trite as that... you can get that crap on any home brew forum.  because  home brew isn't for everyone, especially not for douche bags, hipster aholes, and other jerks.   They gots to go!

What I believe about home brew: 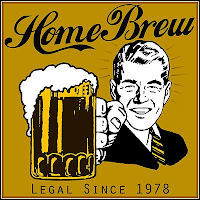 Now on to the contest... Write down for me in the comment section what you believe is most important... just 3 or 4 items... the grand prize... a lifetime of great beer you made yourself.

John and I are brewing Sunday... cant wait... it is a really simple grain bill and all citra and amarillo hops... should be awesome...

Our cream ale is damned near world class.  It was a little sweet, but the carbonation really helped it balance out.    Definitely making it again.  John nailed the recipe, some guys have the gift.
Posted by David Stelting at 9:49 PM