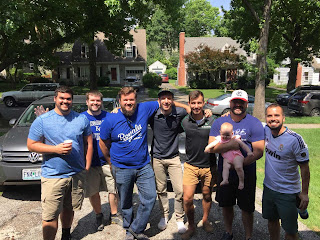 Saturday the crew gathered at John's brewery / garage for a special brew day.  You see Mark's brother is getting married to an awesome girl.  (how awesome?  she loves beer... and not just beer... the girl loves Sour and Funky beer).  And we were asked to brew something for the wedding.   Now the wedding is coming up soon, so there wasn't time to make a sour. (yes I know we could have done a Berliner Weiss, but this is a wedding, how many Bud guzzling muggles do you think would actually enjoy that beer).

We were joined by a whole bunch of Mark's cousins.   And it made for a fun brew day.  Mark and John explaining the process, and why we were doing what we do.  Great beers were sampled, and hi-jinks and shenanigans ensued. 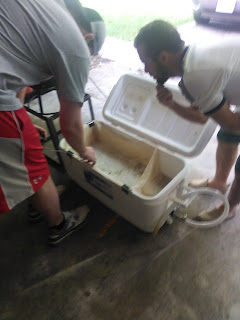 On this brew day we were making Biermuncher's classic Centennial Blonde ale.   If you have never made it, well to be honest if you have never made it, where have you been?  It was the number 1 recipe on home brew talk.  It is a home brew classic.  Equally loved by craft beer fans, and beer muggles alike.  Medium gravity (1.046 target) and low bitterness (21 ibu)  make this beer a home brew classic.  At my home I always have Centennial Blonde or Cream ale available for beer muggles.

Now one thing to know about brewing 10 gallons.   Step mashing is usually faster than single infusion mashing.   Yes, you read that correctly.   Step mashing is usually faster.   Why?  Well use your common sense.  It is much faster to heat smaller volumes of water, and it takes less time to get your mash going.   The entire brew day for 11 gallons of Centennial Blonde, only took  a little over 3 hours, and that included clean up.
On this day we were doing a no sparge 4 step infusion mash, with rests at 132 F, 146 F, 156 F, and 168 F. Now, remember we brew a lot, and we have our process down.   John chose to do a simple water profile for the day.   He mixed tap water with RO water 50/50 and used 5.2 stabilizer to buffer the pH.  Worked like a charm  We were at 5.46 for most of the mash.  His chief aim was making the water softer to let the malt shine a little more.  But we sometimes make Centennial Blonde with tap water and a basic acid adjustment, and it comes out just fine.  Great beer for new all grain brewers.

We doughed in at 142 F, and the mash stabilized at 132 F.  We loose 10 degrees this time of year.  In the winter we pre heat the mash tun, and we still lose about 12 degrees Fahrenheit.  As soon as we doughed in we started our next water heating.  1.3 gallons of nearly boiling water would take the mash to 146 F The 2nd rest is our long rest, it lasts for about 35 minutes. At the end of that rest we added 1.7 gallons of nearly boiling water to get to 156 F.  where we rested for 15 minutes.  Finally we added 3.3 gallons of boiling water to get to 168 F where we rested for 10 minutes.   The smell of the Cargill IdaPils dominated the garage, and driveway.  You can use IdaPils for German Beers, American Lagers, heck you can even use it for Belgians.  Although we prefer the Dingeman's Pilsner for the Belgians.   It really is excellent malt.  An iodine test and taste test confirmed that our mash was complete.  One note on Brewing with John, don't leave an open bag of IdaPils near him, he eats it like pop corn. 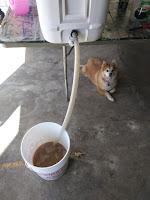 There are so many advantages to a step mash, not the least of which is the ability to manage your proteins more effectively. We breakdown long proteins into medium length proteins.  What is left behind gives great head retention and great silky mouth feel. It's the way beer used to be, it's the way beer should be. Have you ever experienced a creamy meringue like head on a Belgian beer? Well, they step mash.  Step mashing also gives you very complete and predictable conversion of your starches.   The multiple temperatures are a more reliable methodology for conversion than just a long single infusion mash.   John collected 11.5 gallons of delicious pilsner wort.

The boil was uneventful.  Our 12" Banjo Burner quickly brought the 12.5 gallons to a boil.   John added .6 of Centennial at 60 minutes, .6 of Centennial at 35 minutes, .6 of Cascade at 15 minutes, and .6 of Cascade at 5 minutes.   That's it.  It is that simple of a beer.  The deliciousness of the beer has much more to do with it's simplicity.  The combination of Centennial and Cascade is the key.  Don't over do them.  Your target is 20-22 IBUs.  Do not half ass this thing into an "almost pale ale, or a "not very hoppy IPA".  Although these hops work for those styles just fine, do your self a favor, and just follow Biermuncher's recipe.  If you want to mess with something mess with the malt.

At the end of the boil, the wort was quickly chilled with our Jaded Hydra immersion chiller.  This thing is a beast.  The wort went from 210 F to 74 F in 5 minutes.  John and Mark then transferred into carboys, and put the beer in the chamber to continue chilling to 64 F.   When they got home from the Sporting Kansas City match (a Champions league 3-0 drubbing of Minnesota United)  John pitched Fermentis S-04.   The original gravity was 1.046 (spot on). Now, one important note, when you step mash you will have lots of protein break in your wort.  Don't freak out, it will settle out.

This beer will ferment fast, and will easily be ready in time for the wedding.  It will serve to protect the "special beers John has created for Rob on his big day.  But I suspect it will be enjoyed by all.

Posted by David Stelting at 9:22 AM