How to make a Ridiculous dIPA volume 2 - Hops, with Chad Roberts of YCH HOPS

This is a long one, but it's worth it.

"Furthermore, we wish to emphasize that in future in all cities, markets and in the country, the only ingredients used for the brewing of beer must be Barley, Hops and Water. Whosoever knowingly disregards or transgresses upon this ordinance, shall be punished by the Court authorities' confiscating such barrels of beer, without fail.

There it is, the Reinheitsgebot.  The first of many laws governing how beer was to be made. What?  you don't care for the Reinheitsgebot? You are a free brewer, and you'll add what ever you want to your wort...  OK, cool, I'm cool with that.  But,  understand, this is where the use of hops became not just common, but also standardized and regulated.   And thank god it did.   From this point on hops were the key defining flavor of beer. Hops became the flavor that separated one style from another. 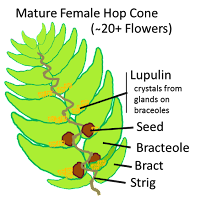 When you back up to 50 yards away and watch a brew day.  They all look very similar.   Water, malt,  hops, and yeast.  Brew in a Bag, 3 Vessel, eHERMS, RIMS, they all look very similar from 50 yards away.  It isn't the method that creates the flavors.   It is the specific choice of ingredients that defines a beer.    Tell me what is the difference between a blonde ale and a american India pale ale?   It is the hops. Nothing else.  What about the yeast smart guy? Well, as much as I talk about yeast, I will acknowledge that yeast is also a key ingredient.  But true yeast whisperers,  the guys who really understand yeast, can use many different yeasts to get the flavor they want, or use the same yeast to get many different flavors. One of the best saisons I ever had was made with US 05 fermented at high temperatures.   The guy knew how to get what he wanted from the yeast.  But there is no way to fake hops.  Each hop has unique properties that make it what it is.  Each hop variety is a separate variety and is genetically different than the other varieties.

So whats in a hop?   By now I am assuming you know what a hop is.  If you aren't familiar with what hops are, this blog may be a little technical for you.   But have heart, I'll keep it as understandable as possible.  And when I say "what is in a hop"  I don't mean cellulose,    I mean what are the compounds in a hop that we as brewers care about?  How do these compounds (acids and oils) react to heat and mechanical agitation?  How can we use this knowledge to control (maximize) hop flavors. For that information, we turn to a pro,  Chad Roberts of YCH Hops.    Chad is the quality control officer of YCH Hops.  He is a wealth of information on hops and how to use them.  YCH Hops is an awesome provider of hops.   They have pioneered small packaging for home brewers.   When you are making a beer for competition, or true excellence, small packs are the choice.  Their Small packs are low oxygen packages that damn near guarantee freshness.   YCH HOPS

What are the compounds in hops that give beer flavor?

Numerous hop compounds contribute to the flavors they add to beer, from the obvious ones such as alpha and beta acids, various oils, as well as polyphenols and the vegetal hop matter itself.

So they are acids and oils?

Primarily, yes.  These are what are judged for their flavor and aroma contributions.  We are beginning to understand more what the other elements contribute as well.

What are the acids and how do they affect flavor?

Alpha and beta acid are comprised of various acids present in hops, and are placed into these two groups for ease of calculation.  They are housed within the hard resins of the hop glands.

What flavor is alpha acid?

Aside from “hoppy and bitter”, I don’t think you can really assign a specific flavor to alpha acid.  Most of the flavors come from the connection to aroma contributed from the oils.

What flavor is beta acid?

Beta contributes somewhat to the bitterness of the beer as well, but as it does not isomerize or solubilize, beta acid bitterness primarily comes from it oxidizing, and has been described as “harsh, or medicinal”.

How long does it take for them to give their maximum bitterness?

A 60 minute boil isomerizes about all of the bitterness that is going to come from boiling the alpha acids in the hops, but some perceived bitterness from polyphenols may also come from dry hopping.

So the longer they are exposed to the heat the more bitterness they provide?

To a point.  After 90 minutes, the only way you are extracting more than the maximum utilization of 30-35% is by actually reducing the total volume of liquid and increasing the bitterness that way.

So does the choice of bittering hop matter?

Absolutely.  While some brewers have anecdotally favored low co-humulone hops for bittering in the belief that they provide a “smooth” bittering, blind taste tests have not given data to back this up.  However, bitter character is most likely informed by the genetics of each hop, which is why some use high alpha, clean hops such as Magnum and Warrior™ to achieve the bitterness they desire while contributing little conflicting flavor or aroma.

What are the oils and what flavors do they give?

Myrcene is normally connected with tropical fruit flavors, and is the most volatile of the oils in hops, so the first to disappear with age.

Earthy, woody, spicy character is classically ascribed to this oil.

Farnesene can range from primarily floral tones into some citrusy character as well.

It is very much like Caryophyllene, and so produces much of the same aromas.

Linalool is closely related to myrcene, and responsible for many perceived aromas in hops, from floral to woody to fruity.

There has bee a lot of focus recently on late hop additions and dry hopping.   Can you discuss that?

Adding hops late in the boil and dry hopping are where you are going to get the majority of your hop aroma, as aroma compounds are volatile and would be boiled off otherwise.

Heat creates isomerization and boils off volatile oils,  fermentation creates biotransformation.  How can brewers use that to their advantage?

Isomerization creates your bitterness, so that is why your bittering addition is at the beginning.   Hop oils boil off at much lower temperatures than water, and the flavors provided by the oils degrade much faster than isomerization occurs.  “Biotransformation” and hydrolization by yeast take the aroma compounds found in oils and change them into other aromas.  Whether or not this is desirable is a point of contention between brewers, and people dry hop with or without yeast present to control these effects.

Is it fair to say you can custom design the flavor of a beer by knowing the amounts of the acids and oils, and how to maximize them?

By using calculators to control the amounts of IBU you extract from Alpha Acids in the hops you use, you can absolutely control how bitter your beer is.  By knowing the oil contents, you can definitely get closer to what you are looking for but a whole host of variables between brewing and consumption affect whether or not the character you are shooting for will be exactly what you planned for.

So if a person wanted to make a ridiculously hoppy double india pale ale (the focus of this series)  they could literally choose what flavors they wanted to emphasize and choose hops and hop usage techniques to maximize those flavors?

Designing your hop bill thoughtfully and controlling all of your processes will absolutely improve your beer and get it closer to what you are designing.

We want a citrusy, piney, somewhat floral, maybe even a little peppery 5 gallon batch of beer at about 95 IBUs   What would you recommend for hops and additions?

For Citrus, I’ve always liked Cascade and Citra™, with pine coming from Chinook and Simcoe®, floral from Spalt and Sterling, and pepper from Summit and Columbus.

How important is freshness and packaging?

Cold storage, packaging quality and retaining an inert (low oxygen) atmosphere for the hops is integral to keeping them fresh.  The crop year isn’t as important as keeping them cold and sealed.  I have professionally used hops over 8 years old and made a great hop forward beer, so I personally am very against the “current crop year or bust” mentality.  (did you all catch that?)

How can a home brewer get the best quality hops?


Buy from your local home brew store, as long as they keep all of their hops cold (below 40 F), even their back stock.  Yakima Chief-Hopunion “Small Pack” product is the first in the market to provide quality controlled, commercially packaged and guaranteed product to the home brew market, and we hold our products to a standard of excellence and trace-ability to ensure that all of our customers receive the highest quality hops we have to offer.

So faithful readers, to sum up what we have learned.   Using hops is not as simple as putting them in your beer at certain times.   A well designed recipe uses the knowledge we all have built to create the flavors we all want.  Some of the techniques that brewers have developed are great.  Some of them are... well, let's just say they don't accomplish what was intended.   And there are exciting new techniques you can use to maximize the flavors you want.  It is really just like everything else. Understanding what you are doing is the key.  So lets summarize what we have learned.

In our next episode we will design our ridiculous dIPA using what we have learned, and I will give you more resources to use in designing a beer.   There have been some amazing developments in the last couple of years.   That is all for now sports fans.