Ok, so many of you are new, or newer, or newish to the blog.   In the past couple of months you have discovered our common sense approach to brewing beer at home.  We pride ourselves on making things easy to understand, affordable to purchase, and easy to brew.  One thing that almost never gets talked about in home brewing is light beer.  That's right light beer.  Low calorie, low abv, clear, golden light beer.   Wait! before you click over to another blog, read the next paragraph.

What if I told you; you can make a delicious, crushable, low calorie beer at home that has decent malt and hop character.  And unlike the macro lite lagers... this one is delicious.  The only thing it has in common with American Light lager is the word light, and the calories.   It is amazingly affordable to brew, and you can use this beer to use up old hops you have hanging around...  Sounds better now right?  Let me sweeten the pot even more, you can customize this beer to have your own house light beer that your Muggle (non craft beer drinking friends) will enjoy and that you will love.  You might add a little, biscuit, or make it with Vienna... what ever you want.

Well, you can.  You can do it with basic home brewing techniques, and with a little applied science. 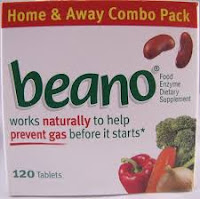 Charlie Papazian originally created this idea in one of his books, and the first time I tried it was after a 2001 article in BYO about Beano Brau by Ashton Lewis.  The basic idea is that you can use de-branching enzymes during fermentation to un-bundle sugars and create an even more fermentable wort.  The yeast will then eat those sugars and the FG will drop correspondingly.  The two main enzymes that brewers use to de-branch carbohydrates are amyloglucosidade, and amylase.  One is readily available at your local supermaket  (amyloglucosade is the main ingredient in Beano), the other (amylase powder) should be available at your local home brew store.  If not you can order it here.  And let me tell you, if you have a SWMBO, this will be one of the beers that she and her friends like.  I have actually made a whole series of fruit flavored beers with this technique. 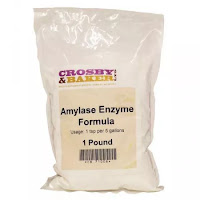 The most common styles that brewers make with additional enzymes are light ales, and light lagers.  And the enzymes certainly help drop the gravity of those light ales to a very low final gravity, but you can use the enzymes to help out any beer that needs to finish lower, crisper, and dryer. Doesn't matter if it is an ale or a lager. Our tried and true recipe is called Miller the Muggle, inspired by a guy on Home Brew Talk who goes by the handle Schlenkerla. So it works really well with light ales, but you can also use this to make a fantastic session IPA. Imagine a beer so crisp that 47 IBUs tastes like a world class IPA.   Anything you make with this method will have a lager like character.  The de-branching of additional sugars during fermentation will make the beer finish dry and crisp. Obviously if you use an ale yeast you will have some ale esters in your beer.  But it is so crisp and dry, it is extremely refreshing.  By the way this is a good way to cheat and make an extract ferment out all the way.  Works great with extra light, light, golden, and pilsner extracts.  Doesn't work as well with the darker extracts.

It may concern some of you that amylase or amyloglucosidase will not work at fermentation temperatures.  I assure you that is not the case.  enzymes will still work they will just work more slowly.  Ideal temperatures for breaking down starches in a mash are not necessary.  Remember the starches you are trying to break down in a mash are far more complicated than the long chain sugars that you are trying to de-branch in a fermentation with enzymes in fermentation. You already did a bunch of the work.

Miller the Muggle - A light american ale... that doesn't suck
138 Calories and only 8 Carbs per 12 ounce serving.  Use what ever hops you have on hand.  Play with this one.  I have actually made a great session IPA with this recipe, 47 IBUs tasted like 100.  All I did was add 1 ounce of chocolate malt, and the Pliny the toddler hop schedule.  That recipe is also below. 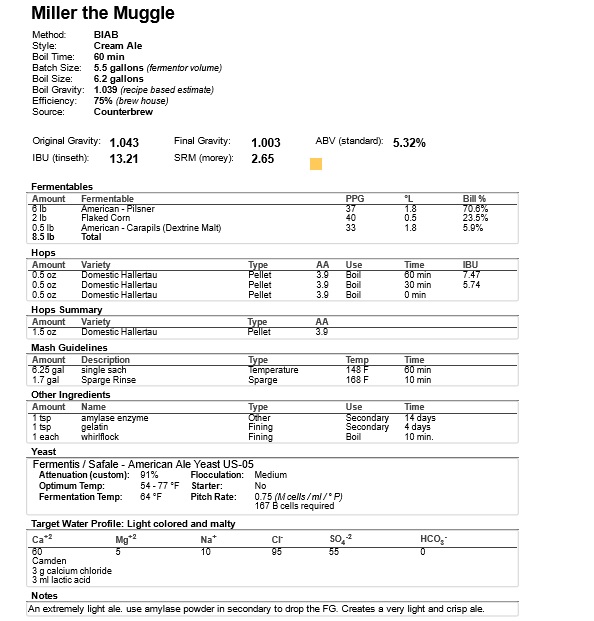 So mash this one at 148 F for 60 minutes.  If you, like us, BIAB then sparge rinse with 168 F water to volume.  If not follow your standard brewing practice.  We're becoming huge fans of the minimal sparge technique promoted by Michael Tonsmeier (the mad fermentationist)  Just divide your total water bill 75% / 25% or 80% / 20 %  This technique is a lot like BIAB with a sparge rinse. Now a lot of people say the temperature of your sparge water doesn't matter, but I for one still use treated 168 F water.   We can literally make 20 gallons of this at a time in our 100 quart mash tun, the grain bill is that light.  Add your hops at the designated times.  What hops? you ask... well we literally use what ever we have hanging around for bittering.  We generally use Hallertauer or Saaz for the flavor and aroma hops.   But you can use what ever you want.  Sorachi Ace has become very popular in this style, as has Citra, Amarillo, and Nelson Sauvin. Pitch rehydrated US05, no need for a starter. Ferment as normal for the first couple of days, when the krausen falls, you add 1 tspn of Amylase Enzyme powder.  The beer will begin bubbling again, and will drop very low in OG.  I have taken a 1.045 beer to 1.000 before.  But generally this beer drops to about 1.002-1.003.   The second fermentation triggered by the Amylase will take a while, but it will clean up all of the yeast flavors. The amylase it self has an unpleasant bitter taste that will fade over a couple of weeks.  When the beer reaches terminal gravity.  Package or bottle as normal, and age for a couple of weeks.   Then chill, drink, repeat.  See it isn't really that hard.

What's that?  you say you don't like low IBU beers?  Well here you go.  Here is a way to make a high IBU beer with the same method.  Because of the low FG, 47 IBUs tastes like a whole lot more IBUs. 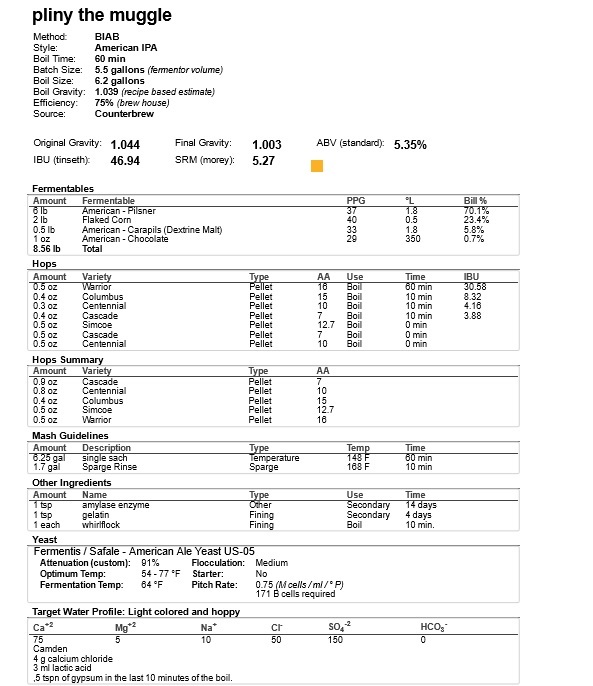 Now, I will be honest and let you all know that I generally dry hop this beer after the amylase fermentation.   I do .25 ounces of Simcoe, Cascade, and Centennial.  But you can do your own thing. What ever you do, make sure you use fresh hops.   Hops that are not stored properly are really a waste of your time and money.  We like the 1 ounce packages from BSG and YCH Hops.  OK, that is all for now sports fans, have a great brew this weekend.

Posted by David Stelting at 2:42 PM