On Saturday morning the team gathered for an epic brew day.   We were determined to brew our version of an East Coast IPA.   10 gallons of hoppy deliciousness.   The recipe was set out in the previous post.  Basically a whole lot of Mosaic, Citra, and Cascade, with a touch of Warrior, and Simcoe, to add some bitterness on the front and in the middle.

This was a fairly medium gravity brew, only 22.5 lbs of grain.   The base grain was Vienna 20 lbs, and the only other additions are  2.5 lbs of wheat malt, and 1 cup of white flour (to make it murky).  The flour is the wild card,  we have never done that before.  We have never tried to make a beer cloudy before.   It was a real weird feeling, adding something to the mash for the express purpose of making a beer appear cloudy.  All of our grains came from Cargill.   The Vienna from Cargill is amazing stuff.  Malty and bready... gives an awesome back bone for a hoppy beer.  Meussdoerffer Vienna... We have made ECIPAs in the past with pale ale, or two row malt, and they were delicious, but the Vienna adds something that can stand up to all those hops.

We crushed the grains fine  (35 mils) the day before at a friends who has a seriously big mill.   Like the kind you see at a home brew shop... But like an idiot, I left the grains in the car overnight, so they were at 51 F as we started the brew day.   We know from experience that when we brew no sparge in our cooler we loose about 7 F.   Even if we pre heat the mash tun.  So our software suggested we should be at 160 F Strike, so we added our grains first and then added 165 F water.    John had treated the water with Camden,  Lactic (2ml) and Calcium Chloride 2 g.   Our pH settled in nicely at 5.2, at temperature, so it was probably closer to 5.4 or 5.5... which is fine with us.

The mash went well.  We stirred every 15 minutes.   Our mash tun has a door on the top of the lid that we can open with out losing too much heat.  Our mash temps remained perfect at 149 to 152 F for the entire 60 minutes of the mash.   And we ended up overshooting by .004... which means we got 77% efficiency on a no sparge, brew in a bag, in a cooler... pretty darn cool.  This is by far the easiest and fastest way to brew.  Even with our complex boil schedule.  We were done brewing in 3.5 hours.   Although the brew day was much longer, due to bottling 20 gallons of beer, and the vertical tasting.

East coast IPAs are fun to brew, and relatively easy.  The boil went as planned due in no small part to organization of the ingredients, and preparation.   Jake got the group more disposable plastic cups for measuring hop additions.  The cups were labeled  and set out in order.  There was well over a pound of hops going into this 10 gallon hop monster.

The fun thing about the ECIPA style is so many of the hops go in at the end of the boil, and there are hop additions during the wort chill.  We made our flame out additions and then we used our trusty Jaded Hydra to chill the batch to 180 F.  At 180 F we added more hops and let them whirl pool for 30 minutes.  Then we chilled the batch to pitching temperatures.  The jaded hydra makes chilling the entire batch lightning fast.  It chilled from 212 F to  179 F in under a minute.  Of course cool ground water temperatures helped a lot.

Early in the day, John re hydrated three packs of US05.  They were ready to rock and roll when we pitched.   As of today (Tuesday) Both batches are fermenting well in the fermentation chamber at 65 F.  Tonight Jake and John will add 1 ounce of Mosaic, Citra, and Cascade to the fermenters.   In a couple of days the batch fermentation temperature will be raised to 68 F to encourage complete fermentation, then in a week another charge of dry hops.   The second dose of dry hops will only be exposed to the beer for 3 or 4 days.   Then it will be time for packaging.   We package beer when it is ready.  Well how do you know it is ready.   It is really simple,  take a gravity sample.   Take a sample and when it is at terminal gravity let it sit a couple of days to clean up.  That is all it takes.

We should be drinking this beer in about 2.5 to 3 weeks.   Can't wait.  This one should be great. 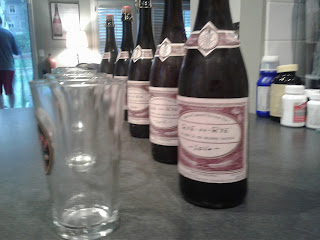 At the end of the brew day, after all clean up, we gathered in the house for a vertical tasting of Boulevard Rye on Rye.   2012 through 2016.    If you are not familiar with Boulevard's smoke stack series... Smoke Stack brews from boulevard are made on their smaller original brewing system.  And they are world class.   This is where Boulevard makes their limited release beers.  This is where Boulevard brewers are encouraged to experiment.   This is where Tank 7, and Lovechild, and Tell Tale Tart were born.  And Boulevard Rye on Rye is an outstanding beer.  It is a Rye Beer, aged in Rye Barrels.

We all had different impressions.   My favorite was the 2015.  It still had some of the Spicy Rye character.   I think everyone else preferred the 2014 version.   Love this beer, and I am thankful that my brewing partners can store and save beer.  I don't seem to have that discipline.   If you have never tried it, stop what you are doing and go get some.

Posted by David Stelting at 8:59 AM