How to make a ridiculous IPA - East Coast IPA...

So over the past year we have done a lot of research into what makes an IPA taste the way an IPA taste.   We have talked with experts at BSG and Yakima Valley Hop Union about hops, and hop oils, isomerization, and flavor.  We have shared with you all the technology of Scott Janish's  Hop Oil Calculator.  And we have brewed a whole bunch of IPAs.

But now it is time to really apply what we have learned to an everyday, medium gravity IPA.   Sure, we designed and brewed Hoptonite.  And we are so flattered that so many of you have downloaded this monster and brewed this beast.    And it is an amazing beer.   But you don't always want a high alcohol, extremely high IBU beer.   And that brings us to this weekend's recipe.   "Persuasion IPA"

With Persuasion we are bringing the knowledge we learned in the ridiculous double IPA series and applying it to what we have learned to an East Coast IPA.   Yes, we are the first to acknowledge that ECIPAs are sweeping the brewing world faster than beanie babies swept through the early 1990s.  Yes, we acknowledge that this is the latest brewing fad.  But... who really cares.  The ECIPA is more than a fad it is a delicious beer.   Here is our take on it.  Backed by the research we have done.  Loads of late hops, loads of whirlpool hops.  and two additions of dry hops.   First addition before fermentation (so the yeast can work on the hop oils), second addition after active fermentation (for pure traditional dry hop goodness). 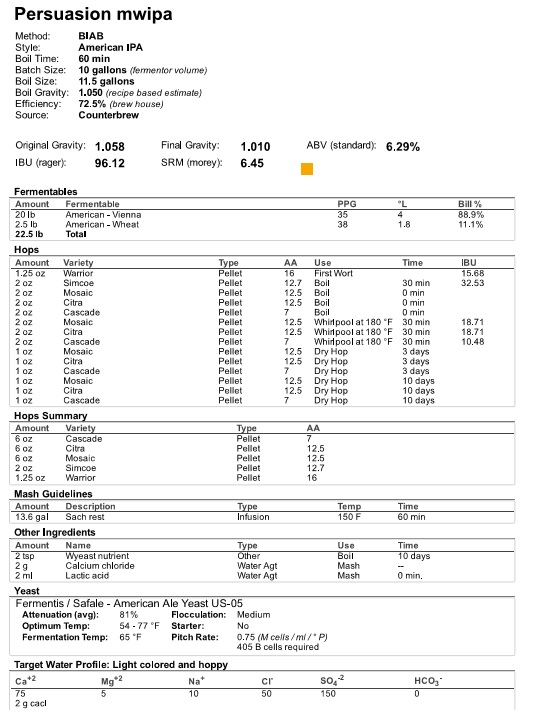 And here is what it will taste like according to Scott Janish.  If you are not using the hop oils calculator on ScottJanish.com you are missing out.  It is the best way to predict the flavor and aroma of your late hop additions. 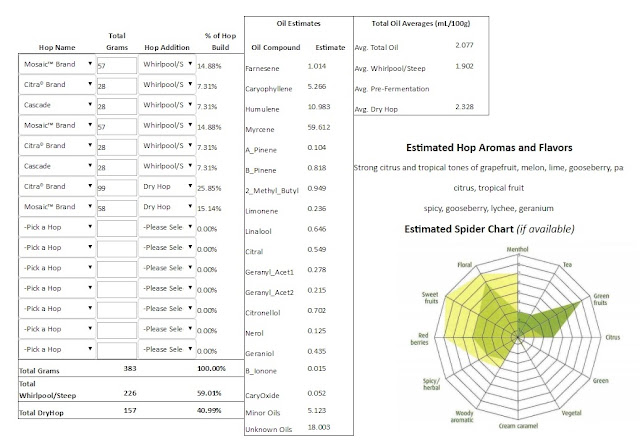