What would they drink in the shire? Warminster Maris Otter Brown Ale...

Years ago, while watching an episode of BrewingTV, I was inspired by the idea of a beer that the hobbits would have enjoyed.  A beer that would have been drank by the pint at the "green Dragon" and the "Prancing Pony".    Mike Dawson was interviewing John Palmer, and during the interview, MD asked JP, what would the Hobbits drink... out of that nerdy question (no judgement #NERDPRIDE!) came John Palmer's incredible recipe forBelladona Took's Oak Aged Mild.   If you haven't made the BTOAM... it is is a fantastic beer.  I have made it several times, and in an ultimate nerdery session,  last year I made a small batch of it (2.5 g) and I drank it as I re-read the Lord of the Rings.  It was an awesome experience that has lead to a pantheon of recipes inspired by film and books. 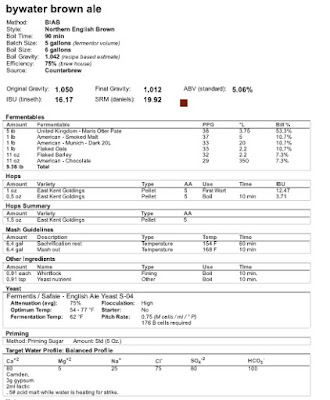 But I am never one to leave, well enough alone.   I for one am always messing with recipes and trying to create a new taste sensation.   And over time our recipe has grown, and changed.   It is now a Brown ale aged on oak, with a touch of smoke... I give you Bywater Brown Ale.

Saturday Mark Anthony and I got together to brew this awesome beer.  We generally brew small batch at Mark Anthony's place, and today was no exception.  I gave you a 5 gallon recipe, but we only brewed 3 gallons.  2.5 to 3 gallons are easily handled on most stove tops, and since Mark Anthony's stove seems to be nuclear powered, his stove makes it really easy.   This was a simple straight forward brew day.   Single infusion mash, no sparge, full volume, no chill... every thing easy.  Jazz on the radio, soccer (football) on the television.

We began with basic water treatments.   The brewing water in Kansas City is like many other cities, great for some styles, lacking for others. We treated our water with 5.2 stabilizer and because this beer is at least somewhat English in its inspiration, we did add some gypsum. We targeted a pH of  5.4.   Yes, 5.4.  when you are doing Full Volume BIAB you want to keep the pH a little higher.  Trust me you will still get full conversion and great efficiency.  It's a thin mash afterall.

For this brew day we were excited to be trying the Warminster Maris Otter.  This is another fine product from the good folks at Cargill.  (It looked and smelled amazing) We used specialty malts from our local home brew store.  The most interesting specialty malt was walnut smoked malt.  Man there are a lot of smoked malt options on the market these days.  I remember when we had to smoke our own malts for a Scottish Heavy or for a Rauch Bier. 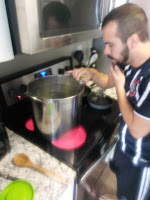 Mash in went well, MAs stove quickly brought the water to strike temperature.  Almost immediately the kitchen took on the aroma of bread, and toast, with the slightest hint of campfire smoke.  Since we were brewing a beer inspired by literature, MA decided to ponder the mash for a moment.   The mash was stirred every 15 minutes and we began tasting the mash at 45 minutes.   Conversion was complete but the mash wasn't fully developed, so we rested for another 15 minutes.   Sometime in that 15 minutes is when the magic happened.  The bread like character of the Warminster Maris Otter came to the fore front, and the taste shifted from "really good" to "damn son"

At the end of the mash we pulled the bag, gave it a squeeze... and checked the gravity... 1.042... way too high for a pre boil mild... the solution... we rinsed the grains, grabbed some more English hops from MAs freezer... and Bywater brown was born.   We knocked it down to 1.036 with our rinse, targeting a post boil volume of 3 gallons, and a OG of 1.046.  One thing you can count on when brewing with MA, he will always have some kind of English Hop and some Czech Saaz around... I think he puts them on his oatmeal.  Our efficiency was over 80%, so the recipe you see above is adjusted down to 75%.

The boil was uneventful  We added hops as indicated by the recipe, at the end of the boil we just sealed up the kettle and let it cool overnight.  The next afternoon, MA transferred to the fermenter, and pitched a package of Fermentis S-04.  The beer is fermenting away, and soon, the beer will be aged for a couple of weeks on toasted Oak chips.


OK so we've been a little inactive recently.  Two of our team member have had babies in the past couple of months.   But were back with a vengeance.   You can expect lots of posts coming up.  I'm brewing 2x this weekend, I will of course post about it.   Even when we're not posting, I am still brewing.   Ive brewed a BGSA (ridiculously good), a hoppy wheat, a Citra Saison, and a Pale in recent weeks.  Increasingly, I brew 2.5 gallon batches.   There is just no reason to brew 10 gallons all the time. But 1 gallon isn't enough beer for the effort.  I think it can be argued that most brewers should brew more small batch.  Not just for experimenting, and practice, but also because this is alcohol we are talking about.   One of the hazards of our hobby is excessive consumption, and possibly alcoholism.  Obviously small batch brewing doesn't solve the inherent issues of alcoholism.. but it can shift your focus from making a whole bunch of beer, to making the very best beer.  It also costs less...  In fact, I will be posting soon about responsible home brewing, and the easiest most affordable way to make world class beer at home.   We'll be examining what is and what is not important to create world class beer at home.   I will also be sharing tips for the brewing of small batches, and for the construction of a small fermentation chamber, and a kegging in 2.5 gallon kegs.


Posted by David Stelting at 10:27 AM No comments: