Extract Excellence Update - How did we do?

So I know you are all sitting around with bated breath wondering... I wonder if those idiots actually got good attenuation from their extract beers?   I wonder if the crazy ideas they promoted actually worked.  And how in the world did those guys convince the best online retailer of home brew products to get on board?   Well, we were wondering the same thing (not really) so last night after bottling our festbier.  John and I sanitized a thief, and took samples.   Below are the results.  I think you will be impressed.  If you haven't read the previous articles on Extract Excellence, you really should, especially the last 2.   The extract apocalypse and What to do on brew day.

Follow the links to the Northern Brewer site, for awesome recipe kits and equipment, and a great community of home brewers like you.


The first beer we tested was Mark Anthony's  Dead Ringer from Northern Brewer.   Their flagship beer kit.  Dead Ringer is a clone of Bell's Two Hearted Ale.  It has been one of their most popular kits.   When made correctly it is nearly indistinguishable from the original.   Mark Anthony created an extra gallon of wort, due to a miscalculation on my part.  So the bitterness isn't quite perfect, but the hydrometer sample tasted excellent.  We decided to add some additional dry hops (centennial and chinook) to give it more of what we were looking for from an american ipa.   Had I not screwed up my calculations, it would be spot on.  The details.   Mark's beer went from 1.052 total OG (with sugar additions) to 1.011 that is an attenuation of  79%... as of last night.  It will probably drop another point or two.  Taking it to about 80% attenuation.   80%... from an extract batch of beer.    It is not overly sweet, or cloying.  It tastes like a really good IPA tastes before conditioning.   So batch 1 analyzed.  We determined that we had excellent attenuation.  The flavor was lacking due to a water calculation error on my part.  But the dry hops will fix that.  Now on to Batch 2.


Jake's batch was the Grapefruit Pulpin clone from Northern Brewer.   And the hydrometer sample tasted extraordinary.   The original gravity was 1.060 but with sugar additions the calculated gravity is 1.062.  The beer dropped to 1.012  that is nearly 81% attenuation from an extract batch of beer.   The flavor is still a little harsh from the vodka / grapefruit tincture that we added.  But that will mellow in the conditioning and aging process.  This is an excellent kit.   No hints of cloying sweetness.  Dry crisp and refreshing.  Wild grapefruit flavor balanced by a great hop bitterness.


If you have never considered this kit check it out and check out the reviews on it.  A truly fantastic tasting beer.  it is based on Ballast Point Grapefruit Sculpin.  As far as I can tell this beer is going to be nearly identical to the original.  It is cold crashing right now, and we will bottle it up this weekend.   Looking forward to this one, as Grapefruit Sculpin is collectively one of our favorite beers. 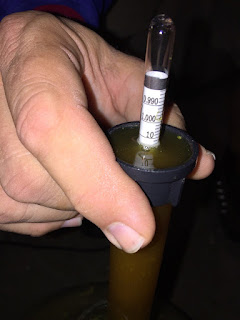 Batch 3 Was brewed by John.  It was Northern Brewer's Karma Citra kit.     They describe it as bridging the gap between American Pale ale and a West Coast IPA.   And the hydrometer sample tasted fantastic.   John brought the brew day gravity in at 1.049.  With sugar additions the total calculated gravity was 1.052.  Exactly where it should be.   His beer dropped to 1.012.  Again 77% attenuation.   No hint of sickly or cloying sweetness.   Just a delicious beer.   This beer is currently cold crashing and will bottle up this weekend.

So,  our goal was to show you how to make  excellent home brew with malt extract.   Our goal was to teach you techniques that create beers you would be proud to share with muggle friends and beer lovers.   As you can clearly see, our techniques for extract work. I know they are a little different than what you are used to, but they work.  Truth be told these techniques are not new.  They are in fact, very old school.   This is how we did things in the Regan and Bush 1 administrations.   Well,  yeah, but would you change anything? Well to be honest yes.  When I make an extract IPA in the future,  I will buy and add additional hops for flavor, and aroma.    But I do that for all of my beers.  The first time I make it I am almost never satisfied.  I taste it and I modify it to my personal preference.   And when it comes to hoppy IPAs ,  I admit it I am a hop head.   I don't really care what the IBUs are, but I want and need the presence, bitterness, flavor, and aroma of the hops.    Having said that, I truly feel that these kits are damned near spot on, for what they are trying to be.   So...

If you are in a hurry and you need to produce beer quickly, or you just want to do an extract again for nostalgia sake.   I strongly suggest that you consider these kits from Northern Brewer.  And use our tricks for making excellent beer with malt extract.
Posted by David Stelting at 2:14 PM