My first infection... 24 years in... a happy accident I give you "American Wild Ale"

I am meticulous about sanitation.  Some might say I am overly cautious.  After the boil nothing ever touches my beer that isn't sanitary.   I even wash and starsan my hands before I dry hop, and the dry hop bags, sit in starsan for an hour minimum.   It is just what I do.   I spray my hands with starsan if I am going to add water or starsan to the fermentation lock.   I spray everything that might conceivably touch anything to do with my dang beer with starsan.   If the dog walks by... you got it... starsan.

Because of my practices I have never had an infection.   For 24 years no infections. 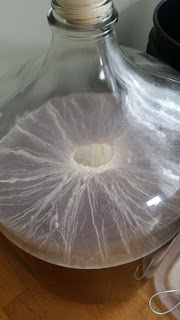 That streak (longer than Cal Ripken's) has come to a happy end.   "Happy" you say?  How can an infection be a happy thing?  It is a happy thing because my beer is infected with lactobascillus. Lactobascillus is a great wild bacteria that creates some amazing wild and sour beers.   So I'll have to wait 6 months to a year, but after the waiting I should have some amazing wild ale.

The pelicle is really cool looking.  It looks like a human iris.   The spot in the middle is the hop bag.  How did this happen?  No idea.  But I have a guess.   My theory is that the hops I bought were not sanitary.  They were repackaged by the LHBS. My theory is that the hippster kid, you know the type who wears his jeans way to tight, his beard way to long, his ironic thrift store clothing way to proudly, the same guy who looks down his nose at anyone who doesn't brew exclusively all grain wild and sour beers, yeah that guy, was touching a "lacto yeast" package before he packaged my hops. Which by the way he touched with his fingers.  That's my theory, at least that is what I want to believe.   But like I said, a happy accident, clearly lacto and now apparently I have a fermenter, air lock, plug, syphon and tubing dedicated to sour beers.  So expect more of those from me in the future.

Posted by David Stelting at 7:59 AM