Ok first off let me say this, brew how you can, where you are, and whenever you can.  Brewing is all about having fun making beer. 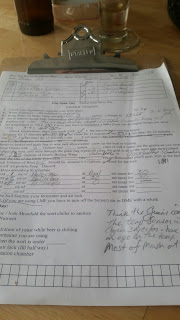 For instance,  You may have read that you cant brew 5.5 gallons of beer on an electric turkey fryer... to that I say... hog wash.   I do it all the time, and I'm doing it right now as I write this post.  I  Cool Gales Cream ale is about to boil.   Tomorrow Ill brew again, also in my kitchen but... Ill be using 2 2 gallon beverage coolers for my mash tun, and collecting about 5.75 gallons of wort for a 4.5 gallon batch of beer, that I will boil in my turkey fryer... the point?  THERE ARE NO RULES.  CREATE WORT AT THE GRAVITY YOU INTENDED, ADD HOPPS, COOL, AERATE, ADD YEAST. 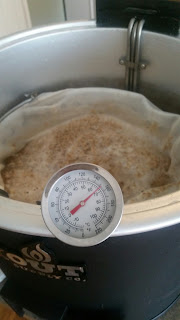 I for one don't care if you brew in a washing machine if you can figure out how.   So when people tell you, "you can't do that!"  Remember... No Rules... just beer. 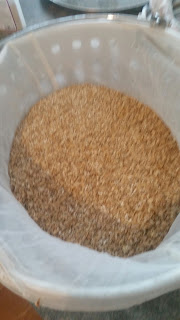 Now having said that my turkey fryer is pissing me off.  Temperature control is me and a thermometer, getting to the boil takes for ever, and the dang valve handle broke.   So now a pair of vice grips is doing that duty.   It is clearly time for the Brau Supply System. 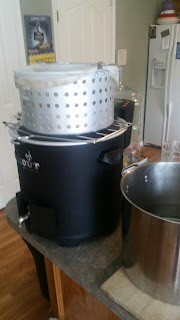 Any way good brew day here got started late, 3:10 pm.   Mashed in at 142 dropped to 131.6.  Perfect for a nice 20 minute protein rest.  We'll See if it matters on this brew.   Mashed for an hour between 150 and 152.  Right where I wanted to be.  But I had to constantly manipulate the controller to keep the mash at temp.  Im too old, and I've been brewing too long for that crap.  Next decent commission, Im getting the BrauSupply Mini.  Ill do extract with grain on the turkey fryer, and All grain on the Brau Supply After I pay my bills of course.  Always remember kiddo's "Bills before brewing, you can't brew if they turn your water off".  If you haven't seen the Brau Supply Mini check it out.  BrauSupply.com  It's a cool system that can do 3.5 gallon eBIAB batches and it plugs into 110V GFCI.  I have that in the kitchen...That's still on the counter.  Which is where I want to be. In my kitchen brewing beer and hanging with my family.   Anyway, After the mash I rinse sparged with 2 gallons, squeezed, and added 2.25 gallons of nearly boiling water.   At boil, i skimmed off my foop.  always skim your foop.  Then added 1 oz. of Hallertauer at 60, .5 oz of Hallertauer at 30, and .8 oz of Tetnanger at 0.    Irish Moss and Yeast Nutrient were also added.
Posted by David Stelting at 3:31 PM