OK, Im obsessed.  I admit it.  (isn't that the first step?)  I enjoy beer,  I really enjoy brewing beer,  I even enjoy bottling beer.  So, yes... I brewed again this weekend.  This time a beer that I have been wanting to try for years.   Pliny the Toddler.  The original recipe is by Drew Beechum.   If you don't know who Drew is, he wrote (along with Denny Conn) Experimental Homebrewing a great book.  He also wrote the best book on home made hard cider, The Everything Home Cider Making Book.   Several years ago he developed a recipe inspired by Russian River's Pliny the Elder.   (look it up).  The idea was to make a recipe that was similar in flavor to Pliny, but far lower in alcohol.  I love Pliny the Elder.  It is probably the best beer I have ever tasted.  So I have been wanting to make this for years.  So... here you go. 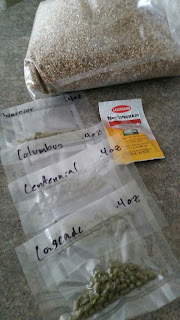 Orgainized my stuff.   This is an all grain batch.  3.5 gallons (5 gallon boil).  A great thing about smaller batches is the cost is way less.   This whole batch cost me less than $20.00.   It uses the same hops that Pliny uses.  The basic recipe is 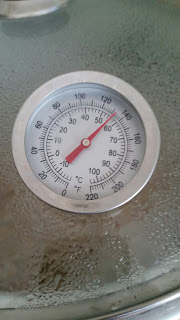 As I have stated here before, I often dough in low, and slow rise to strike temperature.   This approach yielded an 84% efficiency on this batch. The low dough in temperature creates a quasi protein rest.  It allows the enzymes that break down proteins to do their thing.  Protein rests are not necessary with fully modified barley malts, and they can create a thin bodied beer, so you have to think your way through on this topic.   Here is my general guideline, for light bodied beers I dough in at about 135 and let it slow rise to strike temp.   With full bodied beers I generally dough in right at strike temp (which is generally higher for full body beers) and bring it back up to rest temp.  It works for me. 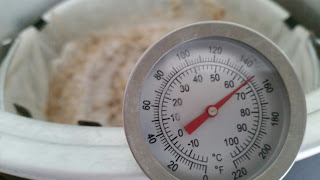 Here is the mash resting comfortably at 150.  It stayed there with almost no fiddling around for the entire 60 minutes.  It is all about knowing your system.   What works on my ghetto electric turkey fryer, may not work on your system.  Babysit your brew! 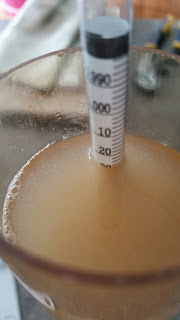 Before the sugar addition (always late in the boil) I was at 1.030.  That is spot on.  The sugar will add roughly 1.006.  So after boil we get a gravity of about 1.045.  Which is what we want.  You always gain gravity in the boil.  Water evaporates, sugars do not. By the way I need to get a new hydrometer tube, that one is just too big, it takes way too much wort to determine the gravity. 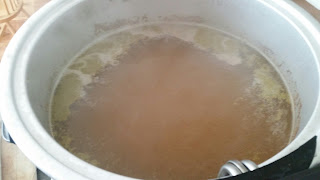 The boil.  Nothing fancy here just 5 gallons of boiling wort.  No boil overs this week, I was diligent. 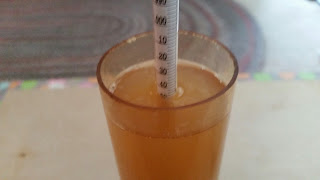 I force chilled it with my wort chiller.  It was raining out side, so I had to use the sink.  Chilling it took 45 minutes.  Gotta figure something out to chill the wort faster and use less water.  Still thinking the jaded brewing chillers, or a prechiller system is probably the way to go. 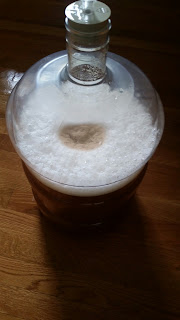 My final gravity was a little higher than expected. (.002 higher) Just means I did a good job with my mash and boil.  And here is Nottingham pitched into well aerated yeast.  I shook the heck out of this one.

Posted by David Stelting at 3:01 PM