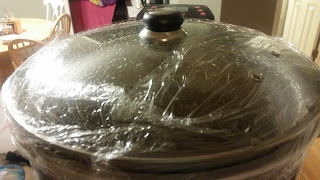 Yup, I brewed again.   2 days, 2 brews.  So much fun.  But Today things didn't go exactly as planned. You see, today wasn't supposed to be a no chill brew day but a meeting at church cut my brew day short.   So for the first time we here at counter brew bring you... a no chill brew day.  It's a strawberry blonde ale, so I'm not worried about the hops. We'll see how it turns out.
Of course Ill keep everyone posted, and if it is great beer, I'll probably start no chill brewing when ever I can. To be honest it has always bothered me how much water is wasted in the chilling of beer.  I know the theory is sound, I know that down under guys do it all the time, but I haven't had the courage to try it yet.  But, hey, anything that makes my brew day easier... 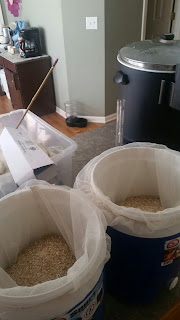 Today was a blonde ale... in my crazy head a blonde ale is a cream ale at a little higher OG and with a little more freedom on SRM and gran bill.  I know classically I should use Windsor or an English ale yeast but I usually use US05.  And this one is destined to have strawberry flavor added, so no reason for a yeast with any complication at all. Truth be told this one is for SWMBO and her girl friends.  It is a classic summer beer.   Ill probably brew a wheat next weekend and that one too will have a flavoring added (apricot or raspberry).  Easy way to create fun summer beers.  My new fermentation chamber can hold 6, 5 gallon fermenters so... yeah, lets fill them all.  When that is done, Ill begin my Lagers and Stouts.   I know many of you brew lagers in the winter for summer, but I brew them in the summer with Wyeast 2112.  The idea is to have plenty of non challenging beers around for football season, and to build a series of beers on one yeast cake (standard lager, premium lager, bock, ocktoberfest) 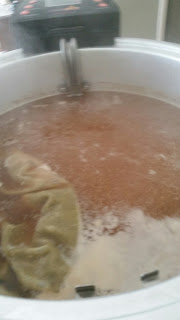 Today was also a traditional brew day.  No partial mash or BIAB.  A relatively small grain bill meant it was time to use the 2, 2 gallon  beverage coolers with the bags as filters.   Using the bags as filters means you don't need to vorlauf.  A quality voile bag will create a clear grain free wort.  Nice time savings.  Even though I could't chill my beer, it was still a fun brew day, and I continued to learn a lot about the Cajun Injector as a brew kettle.  I think I actually figured out my main practices from here on out.   So regardless of how the beer turns out this was a great brew day.  Crazy as it may sound I plan on brewing Partial Mash, most all of the time. A grain bill up to 6 lbs with 2 lbs of DME means I need about 3 gallons of water for strike, 2 gallons of 170 F for the rinse, and 2.25 gallons addition.   It's the addition that makes this perfect... Into the addition, on the stove top, I dissolve my DME.  I bring it slowly to near boiling.  This weekend Ill post a step by step of how I rule the brewing world with my Janky, Ghetto Set Up.