These things are facts;  I have been brewing for a long time. I have won some awards (local only).  I make really good beer.   There is a thin line between confidence and arrogance... and I crossed the line on Sunday.

After church (a service that left me angry by the way, all people should have the same basic human rights!) I decided to brew. Nothing fancy, another cream ale...partial mash... you probably saw the previous post.

Unfortunately for me, I was trying to cram a brew session in before a 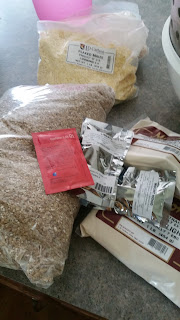 Sunday night engagement I had.  And quite simply I wasn't paying close attention.   I doughed in, put the lid on my electric mash kettle, and forgot to turn off the heat.   So when I opened my mash tun to stir... boiling mash...  So since it was boiling any way.  I stirred and let it boil for 20 minutes then shut it off.   (tested the gravity on this error and it came out to 1.056)  So...I packaged that wort for now.  Ill grab some lager hops, and some lager yeast, california 2112 from Wyeast and make a fully decoted lager from it.  I have no expectations that it will be good, but well see.  This is home brewing, most of my accidents turn into beer that gets poured out.  Sometimes, once in a great blue moon...an accident is awesome and you spend years trying to recreate the happy incident that created it. 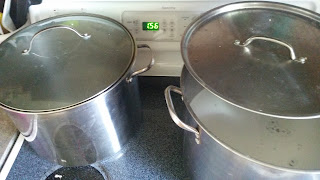 Oh and 1 Gallon of Hot water.   I proceeded to boil this 3.25 gallons of water and extract adding hopps at 60 and 0.   1 oz of mount hood, and 1 oz of liberty.   So... yeah an imperial cream ale, that's what ill call it.  if it doesn't taste amazing Ill add a hop tea or perhaps a fruit extract.

The lessons (re) learned


Even an old brew hound like me screws up every now and then.
Posted by David Stelting at 9:48 AM