Moving with home brew.... and UPDATES on the yeast series / HOPTONITE 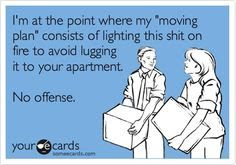 Lets face it moving sucks.   It even sucks when you are moving into a better place or a better life.   And it poses some real challenges for a home brewer.  Changes have come into my life.  And to be honest, I think they're for the best.   So the past week, I have been moving.  And cleaning all of her stuff out of the house.  That was a challenge.  But my brewing friends were there for me, as were guys from church, and most importantly my family.    But there was a challenge related specifically to home brew.  What to do about beers that were fermenting?  What to do about wine?  What to do about mead?

How did we do it?   With out splashing and oxidizing the beer?   Well that is a different story.   But to be blunt, we drove slowly the 21 miles from my old place to John's.  We took the back roads.  We avoided pot holes, and my daughter watched the beer like a hawk.  The beers were placed in the center of the car.  That is the point that moves the least.  So if you are moving with beer, try to get the beer in the middle center of the car.   By the time we got to John's the beers were stirred up.   But not shaken.  At no time did we hear any sloshing, or splashing during the car ride.  In fact,  I think they splashed more on the way to the basement than they did in the car.   Stirring the beers up at this point in their fermentation is probably a good thing,   It will encourage them to complete attenuation. Splashing the beers at this point could ruin them and force us to hop tea the heck out of them or add a fruit flavoring to cover an off taste.

When we got to Johns we carried them to John's basement / fermentation area.  And I was happy that the beers remained largely undisturbed.  The trub layer was a little cloudy, but the beers them selves were in pretty darn good shape.  Of course I wasn't worried about the sours.  Brett, for the most part, will fix it self.  And if we taste off flavors in any of these, we will probably just hit them with Brett cultures and wait 6 months.  Is this level of fanaticism worth it?  Maybe, maybe not.  But we worked hard on these.  I wanted to save them if I could.

Is there a moral to this story?  Yes, avoid crazy women.  The fun part isn't worth the other crap you deal with... wait, no!... a beer moral?  Yes, you can safely move your fermenting beer if you actively plan, and move them carefully.  And remember, if you do oxidize your beer you can simply hit it with brett and wait 6 months.  Then you'll have all kinds of great sour beer.

Some UPDATES (mostly for our benefit but feel free to read if you're playing along at home).

Hoptonite dIPA is ready for bottling.   The east coast IPA is probably close to being ready.   The samples of Hoptonite we tasted were among the best IPAs I have ever had.  Truly fantastic.  Jake and I will bottle at John's on Wednesday night.   The Saison de Pirpaix clone we made is also ready for bottling, as is another Brett Sour I made.  The Wild American Farmhouse ale we made is ready to be racked into secondary and begin its long journey toward awesome.   And the apricot sour is ready to be racked and hit with brett.  August Hyppo needs to be cold crashed.  The lager will probably be turned into a brett sour as well.  It hasn't been lagering for a couple of weeks so that is how we will save it. It's going to be a long night.

Coming up we are making an actual festbeir lager, and we are re brewing some beers we have made in the past.  We will be making the trippel that we all enjoyed so much.  Probably 10 gallons this time with a single infusion / decoction mash out in the big cooler. Easy way to make amazing beer.  That should be fun and educational for every one.  We will be using Cargill Euro Pils this time.  Excited to have a lot of this beer around.   We will also be brewing Alegement, the raspberry Belgian blond, and when Mark Anthony returns from Brazil, we will be making wine.   That will become a regular feature on Counterbrew.   If you just make 1 big batch of wine twice a year, and one 1 gallon wine a month, you are never out of wine.  And let's face it, chicks dig wine.

The yeast series will continue this week.  Kevin Lane and I have been talking about sour beer yeasts. And he has some great insights.

Posted by David Stelting at 6:56 AM