Sorry it's been so long, I am in the middle of a move, and I just haven't had time to post.

So last week John and I joined Mark Anthony at his place for a Funkakelic brew day night.    We set out to brew a 2.5 gallon batch of golden ale.  But not just any golden ale.   This golden ale was destined for the funky side.    This is the easy way to make a Brett beer.   Now, first a warning,  easy brett beer is definitely brett, but it lacks the complexity of a 1 year old 100% brett beer.  It is definitely brett, but you get subtle notes of leather, and horse blanket and cherry pie, and tobacco.  Not big huge notes.   More like a serenade and less like Wagner's ring cycle.

John crushed the grains at his house.  And brought them over in one of our trusty "soy" sauce buckets.  If you are unaware of this resource, most Chinese restaurants have buckets and they will sell them to you for a buck.   They are stained with soy sauce so I wouldn't recommend them for fermentation, but they are really good for other brewing needs.

We mashed and brewed like normal.  With only one slight change, we mashed at 156-158 F.  The mash bill was simple 3 # of two row, 1 # of Vienna, and .5# of  spitz malt. (an undermodified high protein version of carapils by Cargill's partner Muessdoerffer, really good stuff) Our goal was to create lots of long chain sugars for the Brett to eventually eat.   There were only two hop additions.   Both merely to provide balance.  We used up some old hops we had at John's.   But other than that, it was really just a fun normal brew night. 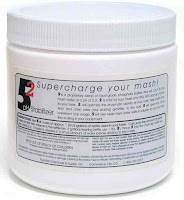 We did not treat the water for this. Well not much.  We used Five Star 5.2 stabilizer.  But no other adjustments were made.  Brett can survive in tap water no problem.   And if the yeast under attenuates and additional sugars are left behind that is just fine.  There are sours that I brew where I do a full modification of the brewing water.  But that is not the point of the easy brett recipe.   Having said that the pH stabilized at about 5.68, not too shabby.  My attitude about 5.2 stabilizer is this,  No, it isn't perfect.  It will not magically get you to 5.2.  But it will get you close.  A little acid malt and you are in pretty good shape.   No, it will not make your beer taste salty, it isn't that kind of salt.  So when you hear that dribble from someone, you'll now know not to listen to them.

The boil was awesome.  Mark's stove is a beast. I don't know why but it just cranks out the heat for small batch brewing.  The hot break was huge for a small batch.  I think that was due in part to the spitz malt.

At the end of the brew day we chilled the batch in the sink and pitched a pack of S-04. 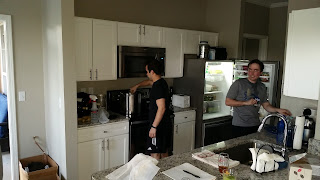 If we wanted to we could just let it finish out, bottle it and be done.   But that is not what we are doing with this batch.   This batch will be headed for funky beer greatness.  This batch was pitched with Fermentis S-04 English ale yeast.  S-04 is one of the work horses of the brewing industry, and of home brewing.   It provides nice subtle fruity esters and is extremely reliable.  But, it is not the best attenuating yeast on the market.   So it leaves behind lots of sugars.   That is exactly what we wanted.  We wanted residual sugars and long chain sugars for the Brett to work on.   Well rack the beer to 1 gallon jugs this week, and then  when Mark gets back from Brazil, we will all sit down, enjoy a unpasteurized brett beer.  And then we will pitch the dregs of that beer into this beer.   It is that simple.   3 to 6 months later we will have a delicious Brett fermented beer to drink.  It will take on the characteristics of Brett, and it will darken some in color over time.  Not sure why.   We will be splitting this batch at racking.  So we may age some of it on oak and sour cherries.

If you enjoy Brett beers.  This is by far the easiest way to make one.   I encourage you all to give it a try.

That is all for now sports fans.  Prost!

Posted by David Stelting at 7:41 AM