The closet cleaner Pale Ale and chilling with Ice. 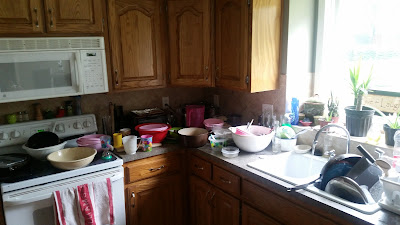 Sunday, I had found some time to brew. Unfortunately, it was Sunday. Which means the local home brew stores were closed.  Here in Kansas City where I live, we are blessed with 7 home brew stores.   But none of them are open on Sunday.   And we had an impromptu get together the night before, so the kitchen was destroyed.   Step one of brewing in your kitchen (Counterbrew) is to clean your kitchen.  So 35 minutes later the kitchen was clean and I was ready to brew.  Now when I say clean I mean it.   I even wipe down the cabinets, clean the floors, and clean the countertops.   Being a brewer has taught me to be the fastest, best kitchen cleaner I know.   By the way washing by hand is way faster than your dishwasher... just saying. 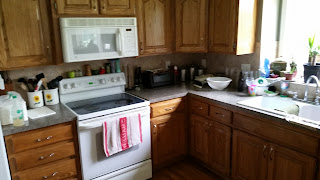 Sunday, and the homebrew stores are closed? Fortunately, I am a homebrewer, I have some of ingredients lying around. Like you, I imagine, I always have the best of intentions for my excess ingredients, but I never quite seem to get to them.

A quick search of the brew closet revealed the following.;


No yeast... hmm... Ok simple solution.  I'll bottle up the 1 gallon Cascade I made a couple of weeks ago and use the yeast slurry from that batch.  I think it was Nottingham.

I have 5.2 pH stabilizer, Irish Moss, and Yeast Nutrient on hand at all times.

This ingredient bill sounds perfect for a 3.5 gallon batch of Pale Ale.   So that is what I made a simple stove top pale ale with 8 hop additions 5 of which came in the last minute.   I even used ice to chill this thing down. 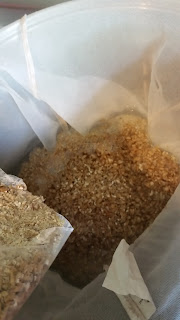 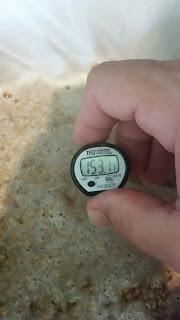 Doughing in on the stove top. 3.75 lbs of grain.   Could have made just a simple 2 gallon all grain BIAB but, I decided that I wanted to use up my DME as well. I added 5.2. pH stabilizer prior to dough in. I heated the strike water to 160 and added my grain.   I came damned close to my strike temperature.   Brewtoad has a feature for calculating strike water. 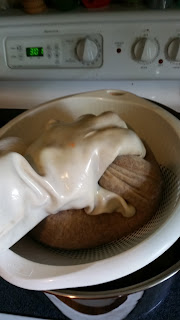 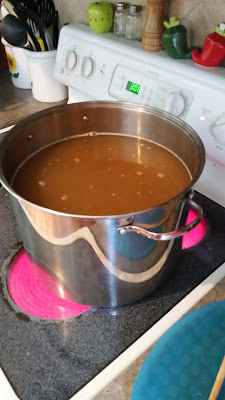 After a 60 minute mash.   I drained the grains and rinsed with about a gallon of 168F water.  Then I squeezed the bag to get to a volume of 3.5 gallons.  Wait? what the what? 3.5 gallons for a 3.5 gallon batch?  are you crazy?  yes, yes we are...I told you earlier I was going to use Ice to chill this down.  So the small boil after evaporation gives me 2.5 gallons.   8.45 lbs of ice brings me back to 3.5+ gallons of wort.  Its simple to do and chills your beer instantly.   Some are concerned about the sanitation of packaged ice.  But in truth the FDA and local health and safety carefully monitor ice machines and ice packaging.   I get my ice at Walmart, the inspection report and date are on the side of the machine.  It was inspected last Monday, and Friday.  And passed with no deficiencies. Seems pretty safe to me.  More on this later. 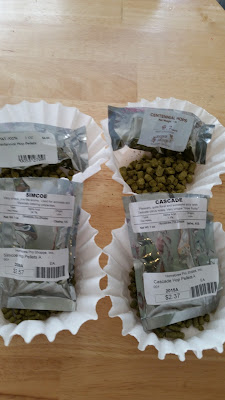 I broke my 4 oz of hops into 8 additions.
Each addition was .5 oz.  Brewtoad estimates 79 IBUs.  Should be amazing.

So 2.5 oz of hops in the last 5 minutes of the boil. That should give me a bit of a tongue stinger. Which I love.  My current favorite commercial beer is boulevard's "The Calling"  This is by no means an effort to clone that beer, but it should still be interesting and delicious.   I mean really, who among us doesn't love a ridiculous pale ale?

I sometimes chill my wort with Ice.  Yes, I have an immersion chiller. Yes, it works greatish.  (It will be better when I can add another 25 ft of coil to it.  But there is something else that works great too.   ICE.   Ice can be safely used to chill down your beer.  and using 1 gallon of ice to chill your beer is far more environmentally responsible than using. 10 gallons of cold running water.    Here's how I do it.

In 10 + years of doing this I have never had an infection.  But I'm a freak for sanitation.  I stay sanitary even during my boil. Empirical experience tells me the practice is safe.   It shortens my brew day.  And it is better for the planet.  So, the Aussies can keep their no chill methods.  I'll stick with my ICE.

Posted by David Stelting at 8:09 AM