Centennial Blonde All grain for the MR BEER LBK

I know I said I wasn't going to brew... but well... I'm me.  I couldn't help myself.  The grains called to me.  I have 4 beer tastings coming up.  That was my excuse.  In truth, I have plenty of beers for the tastings, but not the tastings and the holidays.  So my excuse isn't completely bogus.  I know I usually describe my self as a partial mash brewer, but I love these small batches.  Maybe I'm really a small batch all grain brewer.

So yesterday, when I ran to the home brew store.  I got the ingredients for a 2.25 gallon batch of biermuncher's Centennial Blonde. I have never brewed this recipe, but it was Home brew talks #1 recipe last year.  Another lower IBU recipe.  With the holidays coming up and lots of family and friends coming through the door in the next couple of months... I can't have enough muggle friendly beer around.  I am going to make one deviation from the original recipe, I'm going to add a hop tea it to get more aroma, at Bottling.

So I brewed a small batch 2.25 gallon batch.  On the stove top.  All grain. Started as always by organizing my stuff. 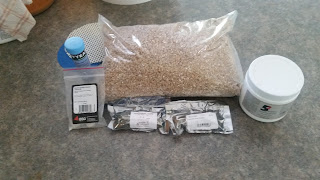 Prepped my water with 5 star 5.2 stabilizer.  There is a lot of controversy about 5.2.  It works for me but it is not the only, or even the best way to treat your water.  As for me,  my brewing water is nearly perfect, theoretically.  But something has changed recently.  So I took a sample and sent it in for testing.  As someone who brews a lot, I need to know what is going on with the water. 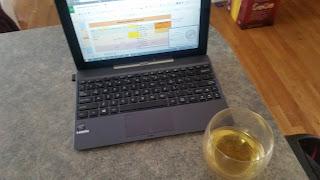 My computer is my constant companion on brew day.   I keep excellent records of my brew days, and since I started using Brewtoad.com my record keeping has gotten even better.   I can go back to any brew and see exactly what I did.

The beer in the rocks glass is the lager from the "Lager at ale temps"  it is fantastic.  Not even a little off.  The yeast we have today is awesome.
This one was Wyeast Czech Pils but, Fermentis 34/70 also works well.  You'll remember, I primary at ale temps then, into the fridge for 3 to 5 weeks.  Wyeast produces two yeasts that can perform just fine for the entire fermentation at ale temperatures.   2112 California Lager, and 2124 Bohemian Lager (fine up to low 60s F)

Nailed my mash temp.  I used the calculator on brewtoad.com.  It has is adjustable variables, so once you put your variables and mash ratio in it will calculate your strike temperature.  This one was 3 quarts per pound... No sparge BIAB. 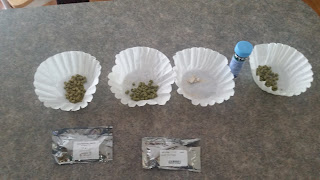 Mashed for 60 minutes.  My pre boil extract was at 1.032.  Which was perfect and predicted.

Boiled for 60 minutes.  With hop additions at 60, 35, 10 and 0.   As you can see, I use coffee filters to organize my hop additions.  One had already been added.  Third from the left has 1/2 a whirlfloc tablet in it. You can see I am using Wyeast yeast nutrient again. 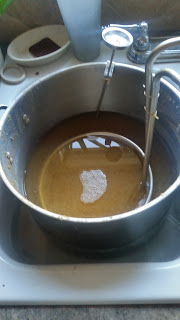 Cooled with my small immersion chiller, and ice water in the sink. The batch chilled in less than 15 minutes in the sink.  I don't like wasting water so this was very encouraging.   In part the chilling was made faster by the fact that the groundwater is getting cooler.  But the sink full of ice water certainly helped.

Aerated with my aquarium pump.   Aeration is one of the most important things you can do to improve your beer.

Pitched re hydrated Nottingham by Danstar.   The yeast seems to take off quickly when it is re hydrated.  Nottingham is one of my favorite yeasts.  It always performs well and it is a great flocculator.   I pitched about 6 g of the package.  Yeast calculator said I needed 3 g. So It is an overpitch.  I had used 5 g of Nottingham in my Cider the day before.

Clean up took less than 15 Minutes.  One of my other favorite things about counterbrewing and small batches. When I was done, it was time to sit down and watch some TV, and have a great beer.  In this case it was my "Gumball Drop" east coast APA.  All late hop additions.   Love it.
Posted by David Stelting at 7:40 AM