So we have made a decision as a team.  A monumental decision to focus on 8 beers.   We want to perfect these 8 recipes.  We want them to be competition worthy and commercial quality. And with two of our team members about to have babies, we will be brewing less often, and brewing larger batches. 10 and 15 gallons each time. But sports fans have no fear, Mark Anthony and I will still be making sours, and other test and crazy batches (hoptonite, a heady topper clone, etc).   But the team will be reducing brewing to about 1.5 x a month.  So, Ill be brewing a lot on my own as well.  For the most part I will be brewing 1.5 gallon test batches of our chosen 8.

Here are the 8 beers we are really going to focus on.  We invite you all to brew along with us.  If we work together we can really make some great recipes.  We will begin this quest, after we make a pumpkin ale from the great people at Northern Brewer and a milk stout to sustain us through the winter (the left hand of fate).

The recipes will be posted on the right hand side of the blog near the top... under Hoptonite. 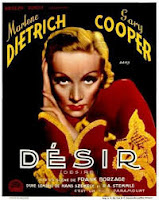 Desir et la Nuit -  Belgian tripel.  Our triple based originally on La fin du Monde.  My personal favorite beer.   Trying to find a better attenuating Abbey yeast.  The last batch was just a little too sweet. And I think we're going to up the spices a bit.   The beer is currently made to our liking, but not to BJCP standard, to get it to standard, we have to make it attenuate more completely. We also need more spice notes from the yeast, so we will be extending our acid rest.  The current plan is to use T58 and WB06 as the yeasts for this beer. WB06 is technically a wheat beer yeast, but it offers excellent attenuation and produces great esters. This will be a fascinating one for you all to keep up with as we are staggering the yeast additions.  I think this will do the trick.  I have seen on forums that people are using this yeast for La Fin clones, so I think we'd better try it.   We may also just break down and buy some Wyeast Canadian Abbey yeast. 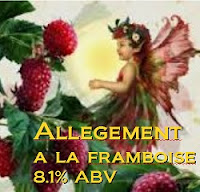 Ein Heldenleben - Munich Helles.  Triple decocted Helles.  It makes for a long brew day, but it is so woth it.  When we originally made this beer John was on the disabled list due to a torn Achilles (but he did manage to eat 10 lbs of pilsner like pop corn)  So his lovely bride Beth stepped up and we powered through the brew day. What we produced is technically the best beer we have made a nearly perfect example of the style.  If you can not lager, you can not make this beer.  Ale versions are just not the same. 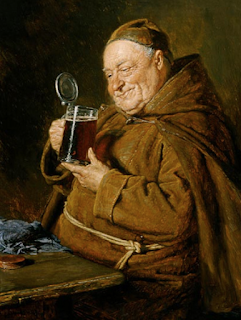 L'humble Moine - the Humble monk -  An abbey single.   This beer was an accident.  Mark Anthony and I were making a session-able Czech pilsner... and I accidentally pitched some washed abbey yeast I had on hand. The result was a beer that we all love.  We originally though of this beer as a Belgian blonde... then we came to learn more about the patersbier style.    It is a delicious entry level Belgian beer.  An easy drinker, and it never lasts long.   We have read recently that some patersbier recipes feature cinnamon and mace, or cinnamon and coriander.  So we'll experiment with that too.

Saison de Pipaix clone -  This beer needs a name.  This beer is inspired by the last steam powered brewery in the world. Brasserie a Vapeur in Pipaix Belgium.  It is a spiced, orange colored Saison, and it is delicious.   We want the color to more closely match the deep burnished gold almost orange color of the original. This is the kind of Saison that makes your beer loving friends, who have only tried DuPont, Henepin, and Tank 7, take heed and show respect for your brewing mastery. 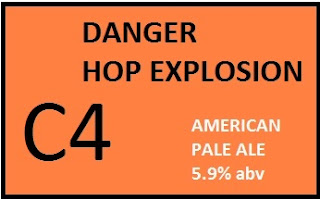 C4 pale ale -  Hey, sometimes you need something hoppy.  And we have certainly made more than our fair share of hoppy beers.  So very many... (and 15 more gallons recently)  This one will never be to BJCP standards, but we think it has huge potential.  We all felt like it could use a little more up front bitterness, and a bit more color.   An odd thing about this beer is that it actually tasted better in the bottle at about 6 -8 weeks than when it was fresh.  So we have work to do on our hop schedule and on our water chemistry.  Yummy delicious work to do.

Belgian dark strong ale -  I have decided that we are the holy brotherhood of de abdij van cerise.  I'm not sure that the monks of St Sixtusabdij van Westvleteren make as much Belgian beer as we do.  We love abbey beers.  And we love BDSA.   I have been making this recipe since the dawn of home brew.   Our most recent batch is too approachable, this beer is for beer lovers not sorority girls. It is not nearly spicy enough but in fairness it is still delicious. So 5 of the 10 gallons is getting hit with Bourbon soaked oak chips and bourbon soaked cherries.  Hey why not?  Everything else gets this treatment.  And the next batch we will extend the acid rest to produce more ferulic acid and therefore more "phenolic" spice.  But other than that this beer is good to go.  A tried and true winner.

Big John's Cream Ale -   Listen to me round eye.   You have to make Cream Ale.   It keeps your processes sharp, and it is delicious and easy drinking.  Your friends who don't like craft beer will still love this beer.  It is my house ale.  I have a friend who only drinks Miller Lite who will drink 2 or three of these every time he shows up.   John's recipe is an improvement on the recent 3 grains craze. John adds not only flaked corn but also flaked barley, which gives it more mouth feel, more "grain" taste, and better head retention.   An excellent beer.  I am always excited when I find a couple of these in storage.  I just found 6 of them, and I still have 5... ok 3,   Ok fine I'm out.   We need to brew this again.


So there it is the 8 beers we will be focusing on.  The 8 beers that we think we can do some special stuff with.   You may be wondering... where are the sours?   Where is Hoptonite?   Well as to the sours, Mark Anthony and I will be keeping those alive and well.  We will protect our cultures, and keep them rocking.  We are about to bottle a sour, and when we do, we will certainly have another brew to put right on top of it quickly.   As to Hoptonite... to be honest, it is awesome, but it is also crazy expensive to brew.   A 10 gallon batch is well over $100.00.  So I will be brewing it solo in 2 and 3 gallon batches.    That is a little more pallet-able to the old wallet.

I will say that we have reached a point where our home brew is superior to almost anything we can buy commercially, and that is very exciting.

Cheers!
Posted by David Stelting at 7:23 AM