So, in our last episode we talked about the easy way to make a brettanomyces fermented beer by just pitching commercial dregs.  But brettanomyces yeast is not sour, it is funky, and peculiar, but not sour.  100% brett yeast produces very little acid.  That is the very reason so many commercial brett yeasts are actually blends of brett and bacteria.  So what do we do to make a truly sour beer?   A mouth puckering delicious beer?

Well, for that we have to turn to bacteria.   Yes, bacteria.   I know that the word bacteria is kinda scary.   You have been taught, you have read,and it has been instilled in your very being to avoid bacteria.  Bacteria is after all an infection, right?  Well, not really.  In an earlier post I stated that an infection is a biological process that is unwanted.  If you want that biological process, it's not an infection, it's just a mixed fermentation.   Mixed fermentation is a term that means, more than one yeast or bacteria is active and fermenting the beer.

"Ok, you did it again, just when I was starting to think you weren't bat sh!t crazy, you went and said something crazy again"  Calm down my occasional and somewhat loyal readers.   I am not advocating using bacteria for most of your fermentation.  Only when you intentionally want a truly sour beer.    If you don't want to drink sour beers, well then... go watch a cat video.

A big part of brewing sour beer is understanding that some sour beer is made with beneficial bacteria. Bacteria is neither good nor bad, it just is.  Bacteria helps make cheese, and yogurt.  Without bacteria you would not enjoy Kim-chi, pickles, or sauerkraut.   So bacteria is/are pretty cool stuff.

Bacteria are single celled micro organisms.  They are the most prolific life form on the planet. This is their world, we're just squirrels looking for a nut. There are about 40 Billion bacteria cells in a tablespoon of dirt from your backyard.  Bacteria survive by consuming, sunlight, inorganic materials (minerals), and organic materials (sugars, proteins, etc.) . Bacteria multiply by dividing.  Generally into two cells (binary fission).    We are only concerned about the bacteria that consume organic materials (Organotrophs).

The two main bacterias (by the way it is bacteria, not bacterias, bacteria is already plural) we are concerned with as brewers are; Lactobacillus, and Pediococcus.   And for the purpose of this post we are really focused on lactobacillus.   Pediococcus will be covered in another post at a later date, on "true mixed fermentation the hard way".

Lactobacillus is a bacteria that consumes sugars and turns them into acids.  Specifically Lactobacillus turns sugars into lactic acid.  It can also produce some alcohol.  But be warned.  Lactobacillus is fast to make lactic acid, and slow to make alcohol.  So attempting to ferment 100% with lacto is probably not the best idea.  I say probably, because I have never tried it.   But I know that the madfermentationist tried it and he felt the results were less than stellar.

"Ok fancy boy, we get it... lactobacillus makes things sour... so what? what does that do for me?" 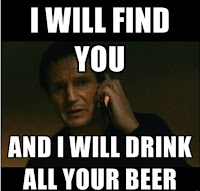 Fair question.  Well, first ask yourself, do you like sour beer? Again if you don't there are hundreds of great cat videos you could be watching.    If you do enjoy sour beer, well then I am going to show you an easy way to make a sour at home.  And this is a sour where you can control the amount of pucker you want, from the beer, from a gentle sourness, all the way to a bracing pucker.

The easy sour method. Sour wort process for a 2 gallon batch of beer.  There is an awesome video of this process at basicbrewing on youtube.  If you haven't checked out basic brewing, you should.  James and Steve do an excellent job. 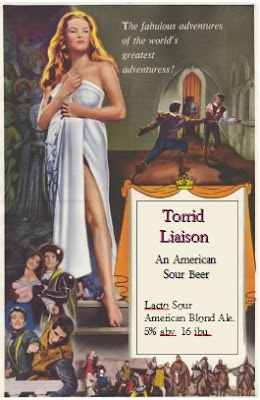 That is how easy it is to make a sour beer at home.   And here is my favorite recipe for sour at home.

Dough into 1.5 gallons of  162.5 F water. Mash at 152 F for 1 hour.  This is a single step mash.   Add a mixture of cool and room temperature water to get the mash to 120 F.  You should have added about 1.6 gallons of water.   If you haven't added enough to have 2.5 gallons, you'll need to add more water. (Hint, heat it to 120 F before you add it!)  Add 0.5 # of base malt and let it sit for half of an hour.   Then pull the bag, squeeze, and transfer into two 1 gallon glass jugs.   I always have a 1/2 gallon growler around too, just in case I have extra.  Fill the jugs to the very top before you put the air locks on. Now,  use a heating pad, or a fermentation chamber, or an electrical blanket to hold the temperature between 110 F, and 120 F.    Hold it at this temperature for 2 to 4 days.    After the sour rest, pour the contents of the two 1 gallon fermenters into the boil kettle. Immediately add your centennial hops.  Bring to a boil. You'll only be boiling for 15 minutes.  Follow the hop schedule. the boil kills off any active Lactobacillus.  From here on out it is just like a normal fermentation.  Chill, and ferment as usual.   The beer will ferment quickly.  It is a low gravity beer.  It will finish Low and strong.   I ferment this in a 4 gallon plastic bucket I got at Walmart from the bakery.  And this beer will be ready quickly.  There is no reason to extend fermentation, or to age this beer.  Make, package, consume, repeat.  I also hoped you noticed there is no fining agent in this beer, I prefer it hazy.  But if you like, you could clear it up with some gelatin.

Here is the best news.  Most of your brewing gear will be sanitary, including your fermenter.  There is no active lacto going into anything other than the 1 gallon jugs.  They are made of glass and are easy to sanitize.  Just put them in the oven at 160 F for an hour.  Turn off and let them cool.  The air locks are the only part of this system that will need to be for sour only.   Pretty cool, huh?

That's all for now.  I think Mark and I are going to brew this up this week.  Although we have the gear to do a 3 gallon version of this recipe, so we may do that.

Wishing you all peace, and good beer!