Hello sports fans, I am going through some of that "life happens" stuff right now.   Then end result of which is that I will be moving to a much smaller space for a brief period of time.  So I will be changing how I brew at home and probably brewing more often.  I need the comfort, the distraction, and the beer that home brewing provides.  The purpose of sharing this with you is to remind you that you can brew even if you live in a small space.

I am fortunate to have a great team.   John's house is already set up for large scale brewing and the vast majority of my big gear is already at Johns.  At John's we can easily produce a half of a barrel of beer if we so desire.  There will also be 4 full sized fermentation chambers at John's in the very near future.  Yup, my big guys are moving over there.  Do you all now see why I advocate brewing with a team?  You never know when your life will change, when you brew with a team, your participation in this great hobby doesn't have to change. 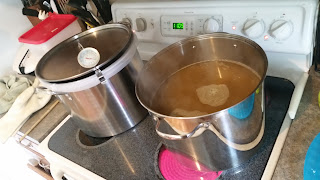 But as for me, When I brew alone,  I will be brewing primarily small batches for the time being.  Really focusing in on sours, and Belgian inspired beers.  I doubt you will notice much of a change on the blog, other than the back ground of some of the photos. But I will be laser focused on 2 to 3.5 gallon batches of beer when I brew alone.  I'm actually pretty excited about brewing more often and digging into sours, saisons, and Belgians more deeply.  I plan to make beer a lot.  Some of which wont be ready for 6 months or even a year.  I think Mark Anthony is about to begin a series of 1 gallon SMASH beers to study various hop flavors.  So I'll probably have him guest blog about that as well. So here is what I plan to do.   And this is what you can do to if you live in a small space.

I am purchasing a Tap-a-Draft system for "kegging" my beers. I may purchase two of them.   The apartment won't have room for loads of bottles.  I plan to switch to champagne bottles for the sours.  Again trying to take up less space.   Plus they look cool, and they impress the ladies. 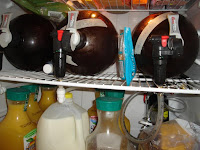 That's all I need. The rest of my bigger gear is getting labeled and taken to John's for use by the team. Tonight we are brewing, and I'm bringing about 250 lbs of grain.  Don't worry about John sports fans, he has already agreed to this brew gear invasion.  True story,  John just confirmed that this was OK as I was typing.  Beth, his lovely bride,  just wants to make sure everything stays organized in the basement, fair deal.

I will primarily be brewing BIAB on the stove top.  Nothing fancy.  No fancy gear, No fancy valves.  Just good ol' fashioned BIAB. Me, my kettles and a spoon.  Direct contact with the beer, decoction, step mashing, Sounds awesome.   I'll be doing 1 to 3.5 gallon batches. I'll use the cajun injector for 3.5 gallon batches.   For beers I really enjoy, I'll make three and a half gallon batches and two gallon batches.. For beers I want to try, or for sours.  Ill make 2.25 gallon batches.   I'll be focusing on beers that don't need too much temperature control, saisons, Belgians, biere de garde.  I'll also be working with yeast that is tolerant of temperature swings, T-58, BE 256 US05, WLP001, Wyeast 1056, San Diego Super Yeast.  That's the plan.

Some up coming beers small batch beers you can expect to see on the blog. 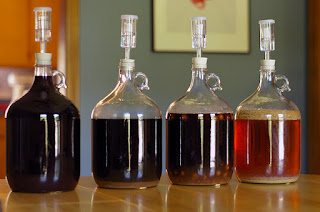 As you can see, most of my beer will be 2 or 3.5 gallon batches. Good beer is a lot of work, I want more than 1 gallon when I make it.  You can also expect more wine and mead coming your way soon.  Wine and mead I generally make 1 gallon batches.  It is really not hard to make wine.  I enjoy the 1 gallon wine kits from Northern Brewer's Partner, Master Vintner  Wine is easy peasy, and quite delicious.  The small kits don't come with oak, but we're home brewers, we know how to fix that.  I have been known to mix Saison with wine, and to mix reds into dark Belgians. Yum!  Mead is one of my all time favorite things to make and drink.  Mead also drinks like wine. So that is a big bonus.

Of course the team will still be making beer too.   So you can expect lots of big hoppy beers, saisons, and BSDA like always.   Soon well be making a couple of lagers. A fest bier, and a PIVO pils inspired beer.  With those we'll be showing you how to quickly ferment a lager.   So that is what is going on here at counterbrew.  Changes are coming.  All of them for the best.

Wishing you peace and good beer!

Posted by David Stelting at 6:52 AM