Do you remember you first time?

By John Borders - Contributor, recipe wizard, and all around nice guy.

This is the beginning of a series here on Counterbrew about clone beers, clone beer recipe development, and how home brewers can mimic some of the commercial practices to create great clone beers.  We will explore where to get recipes, how to tell if they are any good, and how to make them consistently.   We will be cloning and brewing; Pliny the Elder, Pliny the Younger, Heady Topper, Pilsner Urquel, Kentucky Breakfast Stout, and Westvleteren Abbey #12. UPDATE:  Several of you have sent private messages requesting Boulevard's "the Calling", so it is definitely on the agenda. Enthusiastic, and passionate home brewer John Borders is heading up this series for Counterbrew.   Don't let John's modesty fool you, he has brewed more batches this year than many of you have brewed in your entire brewing career.  Over 20 so far this year.  So he really has the fundamentals down.  And, he has a talent for cloning beers.  Somehow the right combination, of malt, hops, and yeast just makes sense to him.   Enjoy.   We welcome your input on other beers you would like to see cloned, King Julius anyone?  John gives his first recipe clone at the bottom. 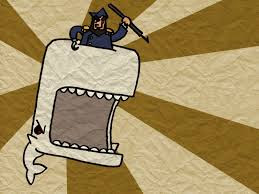 Do you remember your first time drinking one of the really rare beers?  Did you want to shout from the social media mountaintop about your achievement in sourcing, consuming, and enjoying that rare craft beer?  Or did you contemplate keeping it a secret in an effort to consume the sweet nectar all by your lonesome.  While these instances have been few and far between for this Midwest guy, the glorious occasion of scoring a white whale has happened to me several times.   Recently a friend brought both Blind Pig and Pliny the Elder over for a tasting. 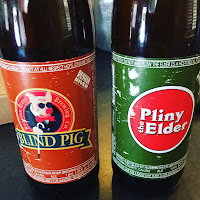 For those of you who are new to the craft beer world or have just begun “hunting” for the latest and greatest the industry has to offer, a white whale is a beer that so infrequently hits your area that a mere Facebook or Twitter post about it from a libation retailer breaks the local Internet.  A few breweries have really figured out the supply/demand equation that drives us wild as our mad dash for these elusive whales has us pondering their actual existence. Can you blame them, really?  By limiting release they sell everything they make, control costs predictably, and create loads of buzz. 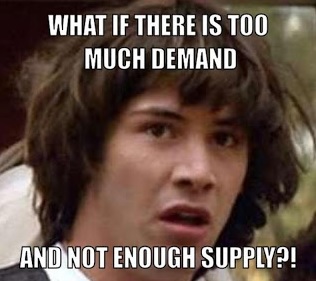 The tactic of limiting production of certain, mostly high ABV brews, has become so effective that small stadiums of beer consumers have become willing to travel hundreds of miles – or more – for as little as 12 ounces of what some might describe as heaven in a bottle. For those who can drop the cash required to visit the California wine country to sip on Russian River 's Pliny The Younger, my jealousy is immeasurable. If you have the time and energy to drive through the winding roads of the Northeast to acquire as much Heady Topper the store clerk will let you take of their hands, I commend you. Or better yet, if you ever get lost en route to Chicago and end up in Munster, Indiana, a stop into 3 Floyds Brewing Company is as imperative as that last rest stop you just passed. Those three are only but a sampling of the most desirable, hard to find beers in the USofA. Even more of these whales exist globally as import gold. Ever heard of Westvleteren Abbey 12?

So, maybe you’re not in a position to schedule your entire year around white whale releases. You live in SoCal, and Burlington Vermont might as well be Honolulu. Well, you could trade Pliny for Heady or for Abner.  if you have something of equal scarcity to offer up, you could offer that. Or you could find a retailer with an online store, but be prepared for purchase minimums – possibly waiting lists. You can get one (1) can from Alchemist or Lawson’s if you add on six bombers from somewhere else that you hadn’t planned trying. But hey, you ‘ll get to taste a bunch of new beers.  Check local laws before you order online, some states do not allow this practice.  So what options do we normal, beer aficionados do when we neither claim desirable geographic proximity to these breweries or just do not have the funding available to acquire them through “beer trading”? The answer is, you search for an alternative. My alternative is to make it myself.  To head to the internet,  find some recipes, discuss them with my brewing partners, and make the beer myself.


Now I have been guilty of this searching, trading, and having friends source beers for me before.  I also must admittedly say as an all grain home brewer, my ability is still growing.  Luckily, I have a great team, and in the past 6 months, We have made over 40 batches of beer.  So what I lack in years, I make up for in consistency, and practice. The other benefit of brewing with a team is the splitting of costs not only of ingredients, but also equipment.  We have the ability to do a small, 2-3 gallon batch on the stove top, all the way up to a 10 gallon, no sparge system.   As a brewer, I am just now getting into designing my own beers, so up to this point I am what you would call a “Clone Brewer”. Basically, I find recipes for my favorite beers, or beer styles and I make it myself. It is fun, it is cheap, and it is addicting.  I carefully vet these recipes out before I brew them.  I'll write more on that at a later time.  You have to do your due diligence with clone recipes. There are a lot of guys writing recipes for home brew that have a lot of enthusiasm but no real experience.
Now for those of you wondering if I have the capability of tricking your very advanced pallets into thinking I have perfectly replicated the illustrious Zombie Dust.  I am flattered by your regard but, I must let you down. I will never perfectly replicate the taste of Pliny, Kentucky Breakfast Stout, or Pseudo Sue; but in my efforts, I will in fact make something I am proud to put my name on. And in the end I get damned close.  Close enough that the differences are very subtle.  At the end of the day, isn’t that all we really want anyway?  A great beer, and to know in general the flavor of one of these great white whales?

My first clone attempt was of the aforementioned Zombie Dust. It was a fun time and as many of you in the craft brewing community, finding a recipe to closely replicate this gem is not too difficult. I did however luck into some of the real stuff to try while comparing next to my effort (aren’t friends business travels the best?). I must say it was a treat, I had my concoction in a glass right next to this near mythical beer, and it was glorious.
Since this first clone attempt I have made numerous cloned batches including several offerings from Russian River, Dogfish Head, and Saison De Pipaix by the great Belgian brewery, Brasserie à Vapeur. If the task of cloning these particular beers seems to be too momentous for you, I advise you start your clone-brewing hobby by making something that is readily available to you. A suggestion may be to try and replicate your favorite craft beer from the local brewery, or maybe even replicating the one that got you into beer in the first place which for me was the Sierra Nevada Pale Ale.
Home brewing isn’t for everyone. It requires a lot of time, effort and patience but can certainly be considered a labor of love. If your quest to find the White Whales in the craft brew jungle is as determined and noble as the Knights of The Round Table, I salute you. If your ambition does not run quite as deep, try making it in your kitchen; you may surprise yourself with what you are capable of creating!
If you have a favorite clone recipe you would like me to try, or would like some advice on finding great clone recipes, comment below and I will be more than happy to help!

Here's my Zombie dust clone - Oh and make sure your hops are fresh and well cared for it it the key to making this beer great.   Always adjust your recipe based on alpha acids.
Posted by Unknown at 9:32 AM