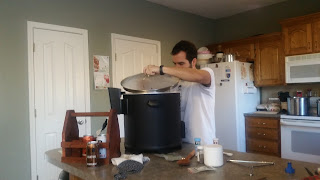 Early Saturday morning Mark and I set out to brew a clone of Stella Artois, that we were calling Soldier Svejk.  In all honesty it is a warm up for a real Czech Pils we'll be doing soon.  Stella is good beer.  In my world, I judge a beer by how it tastes.  Not by whether or not it was brewed at a factory rather than a brewery.

Anyway, Saturday morning we set to make a stella clone.  Things went well with the mash. We doughed in and hit our target temp.  And aside from the mash getting too hot at the end (which isn't really a problem) the mash was uneventful. 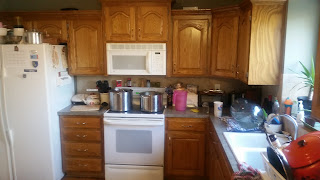 Now this batch was a partial mash.  So we followed my time tested, award winning, ultimately awesome, process for partial mash.   We BIAB mashed in the turkey fryer,  We added 2 gallons of water in which we had dissolved the Pilsen LME,  We sparge rinsed to volume.  And that is when the trouble started.   Our Initial gravity was way high.  When I partial mash, I plan on only getting 70-75% efficiency.  We got 92%.   Freaking 92%.  now a lot of you would be excited by this.   Overshooting is certainly better than undershooting.   I however was not amused.    Overshooting is still a flaw in the process. Overshooting means your beer will not have the bitterness you expected from the hops. 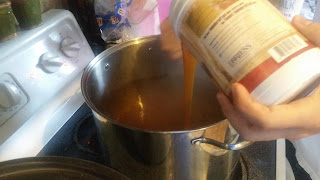 
Here is the good news.   It was a really fun brew day.  Even when you goof up, brewing is still a blast.  Even figuring out what to do to fix your screw up is a great time.  In our case, we added additional hops.   Had we not, we would have had a beer that was no where close to what we had wanted.  I had some Nugget in the freezer.  It is powerful ju ju, with a whopping 14.4% alpha acid.  Just barely under .2 ounces of nugget took our IBUs back up to where they belonged. 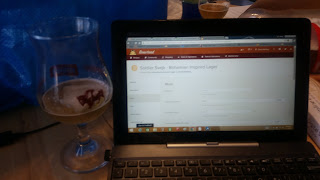 So how did we know what to do?  Experience.  How did we plan what to do?  Technology.  You have to use brewing software when you brew.  I prefer and continue to promote brewtoad.com  It is so easy to use.  And on days like this, the ease of use shines.  Of all the things I promote and talk to you all about on this blog, this is among the most important.   Purchase and use brewing software,  you just have to.   Well you don't have to, but if you don't,  you are a loathsome scallywag and the angels weep for you.   When you are using brewing software you can use the software not only to plan the recipe, but also to make the corrections.   In our case we opened the recipe and began increasing the efficiency until the predicted starting gravity matched our hydrometer test.    This of course showed us that our IBUs would be too low, at the higher gravity.   So we then went to the freezer and looked at my pitifully low selection of hops.  Nugget was the right choice, brewtoad.com helped us determine that .17 ounces was just about perfect to keep the IBUs where we wanted them. 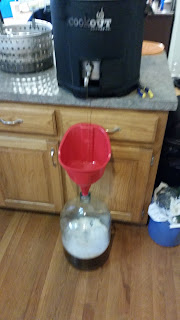 Mark had Star Wars tickets for noon, so we made the decision to "No Chill" this batch.   I wont go over no chill again.   Basically you wrap up your pot and let the beer come to pitch temps naturally.   The batch was ready for pitch by noon the next day (today) but my beloved Kansas City Chiefs were on the television.  So the yeast got pitched at 3.   The yeast was another adventure.  I was rehydrating  Fermentis 34/70.  It was in a mason jar on the counter.  Unfortunately one of the hobbits who lives here, chose today as the only day they ever clean the kitchen.  This particular hobbit thought the yeast was milk that had gone bad... down the drain.... rinsed out, and actually set on the rack to dry.... what the what?  You had to pick today to actually clean up something?   Not to worry, I am a full metal brewing geek.  I have plenty of yeast in the garage fridge.   I pitched 2 pints of some Wyeast 2112 yeast slurry.   This is a lager yeast that performs ok at ale temperatures, and very well at low ale temperatures.  So rather than fermenting in the garage, the beer is happily fermenting in the basement.    The only snafu with 2112 is that it doesn't attenuate as well as 34/70.  But attenuation is apparent, and if you know the tricks you can make any beer attenuate out almost completely.   So... more to come on that as I babysit this beer to awesomeness.   I will be writing a couple of posts on this beer, and how to make a beer come out great... even when you goof.


Thanks as always for reading... happy brewing.  Prost!

Posted by David Stelting at 7:04 AM