2xs the fun Brewday action for you... first the BSDA...

Yup... Im officially insane... no we're not, we're enthusiastic... No quiet voices in my head!... I will write this post... not you... filthy nasty little hobbitses...   I did it again 2 batches in a weekend.   Saturday morning the brew crew assembled early (well early for us) and we set out to brew a Belgian Strong Dark Ale...  And boy did we brew one.  A monster at 1.082  Pushing the outer limits of the OG for the style. 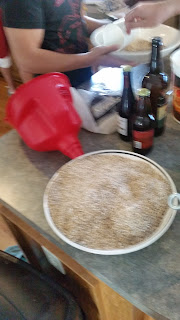 As you can see we milled our grains fine. Special thanks to MA the malt grist machine for coming early and helping me power through the grains.   We also sampled some amazing beers.   Ill let John make a comment below to tell us all what they were.    One of them was an all bret sour, so naturally the dregs got added to my bret sour.  Which should be ready by summer.

Now this was a partial mash batch.   Hopefully many of you have read my partial mash process by now.  It uses 3 pots.  The electric turkey fryer,  a pot to dissolve the DME/LME, and a sparge pot.  I know it sounds complicated, but it really isn't bad at all.   The set up allows you to brew high og beers in the turkey fryer. 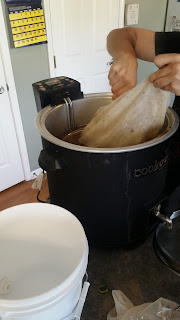 We mashed 8 lbs of grains at 154 for an hour,   We used Rahr 2 row malt.  It is awesome.   Nutty and kinda sweet.   Love this malt.  We also used some biscuit, and some Cara 75.   Yes w used pale ale 2 row not pilsner.  But we did use pilsner LME. Then added the water in which the extract had been dissolved (3.3 pilsner liquid and 2 lbs of light DME, and 1 lbs of wheat malt DME)  Then we sparged to volume.   See?  Simple.  We nailed our gravity.   We were shooting for 1.080 and we came in at 1.082 after boil.     I'd love to tell you that the boil was uneventful but we kinda forgot to add the candi syrup.  So when we were transferring to the fermenter we stole some wort, brought it to 165 added the d180 to dissolve, then added more wort to temper it down to temperature, then into the fermenter.   There is always a solution when you screw up.  You just have to think your way through things.     We also removed a couple of cups of wort and used it to puree 6 oz of dried prunes.... yes prunes.  If you want a super raisin taste in your BDSA try prunes.   But put them in a bag and use them like a hop.   You don't want all that prune fiber in your final wort. I know it sounds crazy, but give it a try. 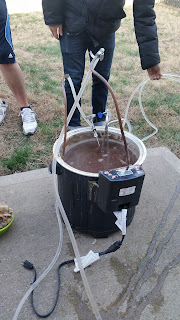 We pitched 2 different Belgian yeasts.   We pitched Wyeast 1214 Monastery yeast, and a pint of WLP 500 that I had on hand.   As of Sunday morning the batch was bubbling away nicely with a beautiful krausen.   Cant wait to taste this beer. 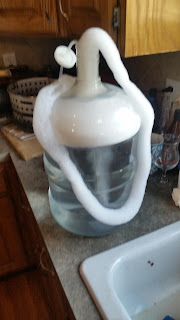 Bonus photo for you.  Starsan does some cool stuff.  in this photo we are sanitizing the aeration stone and the fermenter.   This weird star san snake just kinda formed itself. 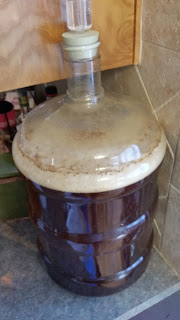 And by sunday morning before church, the Belgian Dark Strong Ale was bubbling away.   Love that air lock action.  I don't ever trust it for determining if a beer is ready to bottle or transfer but it sure is cool to get some tactile confirmation of success.   Right?

This one is fermenting in the kitchen.  It is a Belgian after all.  I want those temperatures up at the high end of the fermentation range.   That is a real key to getting the belgian notes.  The color is spot on.  It is now Monday morning and it is still bubbling away nicely.  It is too dark to see much of the party the yeast is having inside but with the flash light on my cell phone, I can see things moving all over the place.

UPDATE: 1/29/16  The BDSA fermented to 1.008.  French oak chips were soaked in bourbon, and then added to a secondary fermenter.  The BDSA was transferred onto the chips.  That was about a month ago.  The beer is ready for bottling.  It is oaky, but not very bourbony.  But it is delicious.
Posted by David Stelting at 5:14 PM