Every now and then you need to to a "process control brew".   A brew that reveals any and all of the potential flaws in your process.   A brew that can't hide any of these problems.   For us... that brew is a very light ale.  Cream ale or Blonde Ale.   Today, it was a cream ale.   So what separates a blonde ale from a cream ale?  They are very similar afterall.  And today's batch was mostly Rahr 2 row malt.  Perfect for cream ale.  Rahr 2 row should be a part of your regular brewing regimen.

The things that separates a blonde ale from a cream ale are two fold.  1.  Cream ales almost always have corn and or rice in them.   And they always have an adjunct grain  of some kind. Blonde Ales only have barley in them, base and crystal.  2.   Cream ales almost always feature noble hops, or the american version of a noble hop.  Blonde ales often feature another type of hop.  i.e. biermunchers centennial blonde.  Cascade, centennial,  even citra are used in blondes some times.

I'm actually a big fan of cream ales.  Not only do they taste delicious.  They protect your inventory of more esoteric beer from the muggle hoards who want to "try" your home brew.   You know the type,  friends of your wife who think bud is actually the king of beer.    These people are dangerous to your inventory.

So we set out to brew a cream ale.   John wrote a great recipe.   And we started early Saturday morning.   Well early for the millennials, for me... a certified Gen Xer... it felt like noon.

We doughed in at 156.9 hoping to mash at 149.  But we had a tough time maintaining temperatures.  First time with the electric rig at Johns house.  Now that may seem like a cop out, but trust me, it is not.  The power in the older homes is wildly inconsistent.  We eventually figured out that turning off the accent lights in the family room, gave us consistent power, and mash temps.  It was Me, John, and Jake this week.  MA having fallen victim to some dreaded illness... So, other than the temperature fluctuations, the mash was uneventful.  We followed our normal, taste and see mash method.    The mash was done in just under 65 minutes.  Remember, a mash with corn in it is going to take longer.  The enzymes in the barley have to convert the corn as well...

Despite the ups and downs of our mash, we still exceeded our targeted SG.  This time we just barely overshot.  We hit 82.3% efficiency.  Which is a little low for Johns house.  So that tells us the inconsistent mash did have an effect on our efficiency.

The boil was straight forward with on 3 additions, Mt. Hood, Liberty, and Liberty.  We wanted to stick with American hybrids of noble styles.    This beer after all was originally created by American brewers to compete with light lagers.

Here is the cajun injector in action during our boil.  It really does well with the lid on but ajar like that.  It is so rigorous, and vents so well, DMS is never a problem. 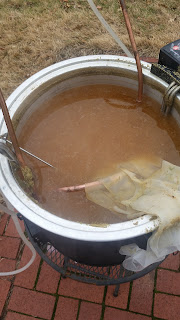 At the end of the boil, we used both immersion chillers to cool the batch.  That is parallel 50 linear feet of cooling power.  The chill only took 15 minutes, for a 5.5 gallon batch.  For fun we left the thermometer in the pot,  It was cool to watch the needle sink so fast. 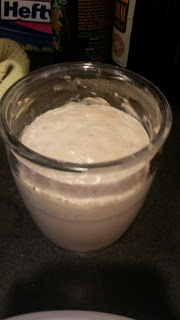 After chill down, we aerated for a good 25 minutes with the aquarium pump, and then we pitched a very healthy Fermentis S04.  Fermentis says you don't have to rehydrate any more.  But we always do.  We actually rehydrate at the beginning of our brew day.  Lots of guys think because you don't have to rehydrate... you shouldn't.  I'm sure Kevin and the gang at Fermentis would still agree it is preferable to rehydrate.   With the billions and billions of cells we get from a dry yeast package there is no reason to make a starter.  By rehydrating 4 or so hours before pitching, we get amazing yeast action.  Our beers are bubbling away with in hours of pitching.

Overall it was a great brew day.  We were shooting for 1.048, we got 1.052.  So we overshot a bit, but not too bad.   This should be an amazing cream ale.  John reports that the active portion of fermentation is largely over.   The S04 was so healthy and in such a healthy environment that it took off like a rocket.  We'll let it sit for a while to clean up before bottling.  But it is really cool to see such a healthy fermentation.

Posted by David Stelting at 7:30 PM