1 gallon Saison Ommegang Hennepin Clone YOU CAN GO ALL GRAIN! 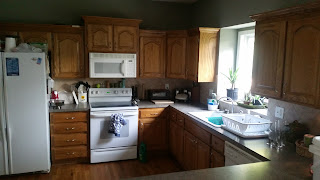 So SWMBO was an angel who cleaned the kitchen for me the night before brew day. So Saturday morning I woke up to a clean kitchen that was ready to brew.

It was an early morning brew day.   My first brew of the day was therefore, a pot of coffee.   After starting the coffee I started cleaning all of my equipment, and organizing my ingredients.

Today's brew day is a 1 gallon all grain brew.  I am here to tell you, you can do an all grain batch of beer.  It isn't that hard, if you can make oatmeal, you can make all grain beer.  A good strategy would be to do 1 or 2 gallon all grain on your stove top, and 5 gallon batches however you normally do them.  Today's beer is a saison.   Saisons are gaining popularity in the brewing world, but a word of understating before we get into the explicit photos. .  Saison, means season in French... and also in Flemish (kinda... it is the slang they use for the word season "seizoen").  So when you say I am making a Saison... I ask you which seasonal are you making?   In modern brewing Saisons are best represented by 2 commercial brands. Boulevard Tank 7, and Ommegang Hennepin.   They are both excellent examples of the Saison style.   Although, originally Saisons were not high in alcohol, they were the seasonal beers that were given to the farm workers.   Beer was safer than water... you don't really want your workers drunk in the field, so you gave them beer.   And one more thing... Saisons are not super hoppy, and not supposed to be high in alcohol.   Some american home brewers are making super hoppy Saisons.  I'll admit the saison yeasts do well with hops and the end result is delicious, but that is not a Saison.  It's something new... American Farmhouse Ale maybe. 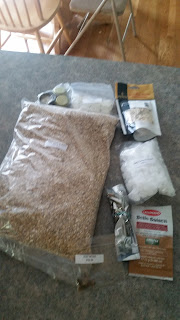 I organized my ingredients like I always do.  With a small batch you may be tempted to think... hey no big deal I do much larger batches, I can slack off a bit today.    But really you cant,  a small batch can get a way from you much quicker than a large batch.  Why? you say... same heat, less water.

Basically  I love 1 and 2 gallon batches.   Really the only beers I brew in large volumes now are the tried and true gotta have them on hand beers.  Cream ale, Miller the Muggle, August Hyppo (AIPA), Wimpole Street Brown, Everyday Pale Ale and Wheat Beer.   Everything else, is 1 or 2 gallons.  In truth almost everything would be 1 or 2 gallons if I had more 2.25 gallon fermenters. 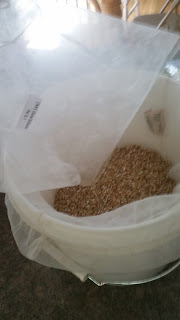 Use a fermenting  bucket to put your grains into your brew bag.  Your SWMBO will thank you for this, and it makes it so much easier.

After a .25 tsp water treatment with 5.2 stabilizer... I Doughed in low, as I like to do.   I started brewing in the era when grains were not fully modified.  We had to step mash to avoid DMS and get great conversion from the grains.

Doughed in at 135 and rose to 152.  Held the mash at 152 for 45 minutes.  Turned the heat up to reach 168 F for 10 minutes.   Mash outs are not necessary, especially in no sparge BIAB brewing.   But sugars are hydroscopic, and as such, they are more viscous at low temperatures and less viscous at high temperatures. So whether or not you are a fan of Mash Out, science is science.  They improve efficiency.  They just do. 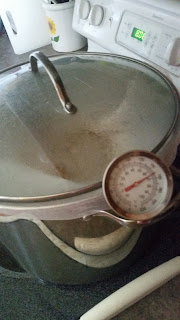 So after a quick mash out, I brought the batch to a boil.   I added in .33 oz of Styrian Golding Hops.   At 10 minutes I added Irish Moss,  My small wort chiller, and yeast nutrients.   At 5 minutes I added the Spalt hops.   These are the traditional Hopps.  I also added 1 round sliver of fresh ginger, and .25 oz of bitter orange peel.    That's what the recipe said.    This is not a fruit or spice beer.  But as you progress in your brewing hobby, you will find that many, many Belgian recipes have herbs and spices.  They really aren't predominant, But they are interesting background flavors.    Saison's, almost always have ginger and bitter orange, Wit beers almost always have corriander,  Quads often have currants.  Belgian Brewers scoff at Reinheitsgebot, and I love them for that attitude.  We have a Belgian guy who brews here in town.  He's not in the clubs, he doesn't compete.  He brews because he's belgian, that's what he does.  He also makes cheese, wine, soap, and sausage.   He doesn't consider himself a homebrewer.  It's just what you do... You make what you can with what you have, the best way you know how.   If fruit makes it taste better use it.  If sugar makes it better use it.   4 ingredients?... well that is just silly.

The smell coming from the brew kettle was amazing.    I will say, not every one like the smell of wort boiling.  My SWMBO is one who can't stand it.  So we have an agreement... I brew anyway.  If she doesn't like it she can go elsewhere.  Yeah, Im' that guy.  On this day, she went elsewhere.   My youngest on the other hand thinks wort smells like malt-o-meal. 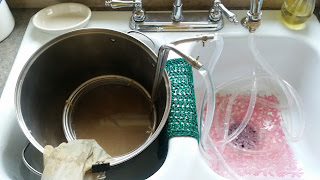 I chilled this batch with my small stainless steel wort chiller.  It can take the batch from boiling to pitch temps in about 13 minutes.   I am ordering the Wasp from Jaded Brewing.   I think we owe it to the planet to use as little water as possible when we brew.    But for small batches the stainless coil works great.  After chilling, I aerated and pitched Lallemand Belle Saison Yeast.   As of now, it is bubbling away.  66 F for the first couple of days. Then I will raise the temps to 80 F.

If you've been wanting to try all grain brewing. I encourage you to try small batch brewing.    You can do it.  And you can make fantastic brews right on your stovetop and counter.   The key is breaking down the steps and staying focused and calm.  You'll get to a point where you can do other things while you brew.   Eventually you'll be out mowing the lawn while you're mashing.  You'll be cleaning the garage during the boil.  But at first just stay focused.   Relax Don't worry have a home brew.  RDWHAHB.

Posted by David Stelting at 9:51 AM