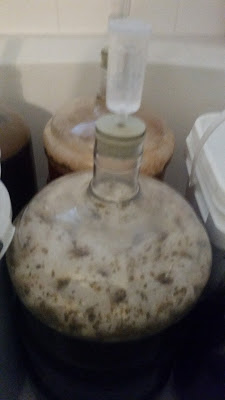 On Saturday I helped a friend brew his first batch.  My equipment, his ingredients.   He chose a Trappist ale.   And we did it the way he could do it at his home.  We didn't use any of my fancy gear. Just a 5 gallon pot, and a good attitude.   Haven't been that minimal with brewing in a long time.  We did use my immersion chiller.  But trust me this guy could make one of those in about 10 minutes.   He's a professional machinist and die maker.    We went to the local home brew store (lhbs) and he chose a Trappist Ale.   My nearest local home brew store has amazing kits.   Several have won fairly major awards.   If your an extract brewer, get to know the local stores in your area and find out which one has the best kits.  You'll find that they all have one or two that are great, but generally one of the stores specializes in kits and in working with new, or casual brewers. In my area that shoppe is Home Brew Pro Shoppe

A little over 24 hours later and the white labs Trappist Ale yeast is doing it's job.   The  Krausen is very high.  Thought I might have to put a blow off tube on, but seems to be subsiding.  (YUP, needed the blow off tube).

I only do a couple of extract a year.  I'd forgotten how easy it is. I kept looking around thinking... "What am I missing".  I might have to mix in some more extract batches.  It was fun and easy.  The only drawback is the cost.   $43 - $55 plus yeast upgrade?  Uh...yeah, I'll probably only do extract if I know my time will be crunched, it's just too rich for my blood.

Wimpole Street Browning  (another archaic literary reference)
I love brown ales.   I like NB Caribou Slobber, I like John Palmers Elevensies, I love Big Sky Moose Drool, heck I even like Newcastle Brown Ale.    This is my brown ale.  I like it the most.  Probably because it is drunk fresh, and because I made it.   Although, on a side note,  I have noticed recently (especially since I started writing this blog) my beer tastes better than most of the commercial beers I try. 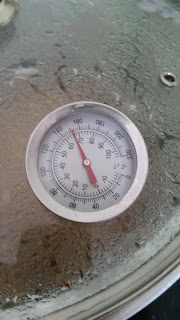 Doughed in low, as i prefer to do.   There is a weird fascination with "hitting strike temperature perfect". I believe that is because most brewers either don't have direct heat mash capacity, or don't know how to make the adjustments with water infusions.

You can adjust the temperature of your strike and dough in with either hot water or ice cubes.   It isn't hard to do.   I have direct heat, so I prefer to dough in at 135F and rise to 150.  I find the cajun injector will hold 6 lbs of grain, and 3.5 gallons of water perfectly at 150-151 F when set to 175.   I have to stir the mash throughout the process.   But that increases extraction anyway.   Even if ever so slightly. 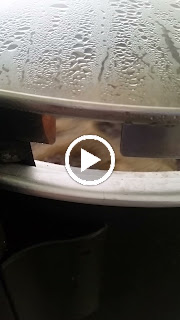 The boil was vigorous.   I leave the lid on and ajar. This limits my boil off, but also creates a really vigorous boil that breaks down all of the proteins.
This boil definitely knocked the proteins out.  I had to spray this one down several times.

The dang video isn't working.   But you can see the foamy frothy boil on the top of the wort.

There is no risk of DMS when you are using well modified grains and when you are ventilating your wort as it boils.   DMS fear is a relic of a time when grains weren't fully modified.   With modern mashing techniques and technologies there is minimal risk of DMS.  Still if you cover your mash completely you will create some DMS precursors. So if you, like me, use a lid to increase the boil, just make sure you vent off your boil. 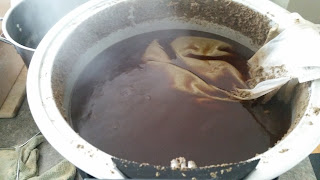 I've gone back to hop bags.   It just saves wort.  So I clip a full sized bag to the handle of the kettle and let it really move around.  I have not 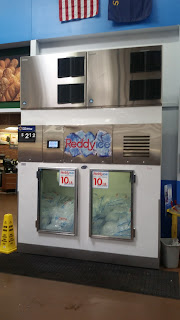 noticed a difference in the amount of hop oils, aroma, or flavor.  But I will keep you posted.   Think I'll do the same with dry hops too, just sanitize a muslin bag, fill it with hops, and throw it in.   I use the big bag so the hops can really move around. 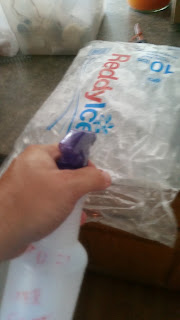 After a 20 minute stand. I chilled this one with ICE. 190 F to 78 in under 10 minutes.   But again I sourced my ice carefully.   I make sure that the ice machine has been cleaned. I sanitize everything.

Overall a great Brew day.  I overshot my numbers slightly.  But, no big deal.   Think I'm just getting really good at using the Electric turkey fryer.  Time for 1 gallon batches again.   The whirloment 2000 is full of good beer. 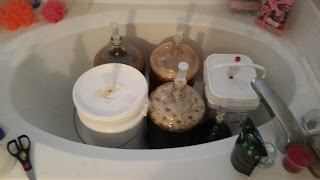 Coming up is the Ommegang Hennepin Clone 1 gallon batch. After that?  who knows.   What do you all think I should brew next?  I've been thinking a Mocktoberfest 2 gallon might be cool.