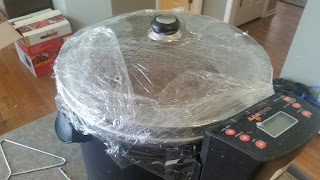 It wasn't supposed to be a no chill brew day.  It was supposed to be a treatise on cooling with ice.  But, as I've warned you,  you have to source your ice carefully.  And well the inspection of the ice machine was last Monday, and it hadn't been cleaned yet Saturday morning,  the last cleaning being Friday morning at 2:34 am.  Alright. .. no chill it is.   NOTE this is not the norm for my local Wal-Mart.  They're normally on the ball.

Whenever I can I try to think about the environment.   As a home brewer you can waste a lot of water.   7 gallons minimum are needed to brew 5 gallons of beer.   Chilling with a wort chiller means another 10 to 20 gallons.   So I try whenever I can to use less water.  I'm currently designing a closed loop system with a sump pump. So that I can chill fast and use less.
My strategies:
1. Chilling with ice
2. No chill
3. Closed loop system with a sump pump in a cooler of ice water.

No chill was,  like many recent beer innovations,  invented by the Australians.   They have had a huge drought for many years.  Beyond their normal arid climate.   It occurred to some one some day that there was no reason to chill wort quickly if you could protect it from microbes and just let it cool naturally.    Zero water use.  The only hang up. .. hop oils continue to react with the hot wort.  So it's tough to make super hoppy beers.   They compensate with hop teas and dry hopping.
But when you're making cream ale... one of the least hoppy styles. Well then, "goodonya, It's all apples mate". (typed in my best Aussie accent)

So here is my brew day.
Before I start brewing, I wash all of my gear, and organize my ingredients.   In this beer there aren't a bunch of crazy hop additions.  When there are crazy hop additions I tend to split them up and set them on sticky notes with the addition times.

If you don't organize, you'll find yourself running around like crazy trying to find something you may need later.  After I took the picture I realized, I didn't have my pH stabilizer, irish moss, or yeast nutrients out.

I always check the temperature of my grains.  There are many calculators on line that can help you hit your strike temperatures.  Long term I am determined to get the BrauSupply UniBrauMini.  It can easily produce 3.5 gallon all grain and 5 gallon partial boil partial mash. Controlling mash temps is the biggest challenge of the electric turkey fryer. But the more I use it the better I get.   On this day, in this kitchen I nailed it.

The key to getting the strike and mash temps correct on the turkey fryer, is to use the insulation between the walls and the kettle.  Get the water to temp.  Dough in.  Then cover it with blankets and walk away.  I open it at 30 and 45 to check temps and stir.  Thats all.  Just walk away.

The mash went  smoothly, and I added 2 lbs of DME dissolved in 2 gallons of water.   Then I rinsed the grains with enough hot water to bring my pre boil volume to 6.5 gallons.  (by this point SWMBO had informed me we had plans and I would not have time to chill with my immersion chiller and pitch my yeast).  OK, this beer isn't very hoppy, so I guess I'll no chill it.

As you can see if I put the lid on during the boil, I leave it ajar by about 1.5".  This gives me a rigorous rolling boil.   It also allows the dreaded and overly feared DMS precursors to boil off.   In truth modern malted barley is so well modified, there is very little risk of DMS.  But a rolling hard boil breaks down protein and makes for much clearer beer.

So this brings us to the end of the boil.   At the end of the boil, I pulled the hop bag,  and let it drain out completely.  I twisted it to extract all of the yummy hop oils.   Then I wrapped the kettle in saran wrap and foil (not pictured) all the way around the seam, and let it sit.   It is a little after noon now. and the kettle seems to be down to pitch temperatures. So very soon, Ill go let it drain into a sanitized fermenter, hydrate my US05 and put it into the whirloment 2000 fermentation chamber / whirlpool tub.  The whirloment is staying around 66F even on 100 F days. So.  I figure my primary active fermentation is getting up to 69F or 70F. Not bad for Safale US05.   It doesn't kick off anything funky until the

high 70s. If you don't have true temperature control.  And I don't right now due to some a hole scrappers stealing my undercounter fridge as it was out side drying out,  US05 is a great choice.  You can make just about any clean ale style with it.   As of this morning the US05 was rocking. With a nice krausen already developing and an occasional bubble.   Should be another quaffable cream ale.   A Quaffale if you will.  Next weekend I'm having a brew party at home.  Some friends who brew, and some newbies are coming over to learn from the old guy.

Had a sample of this last night, I was adding gelatin to make it crystal clear... it's freaking amazing.  Cant Wait to get this one in bottles and 2 liters and start drinking it.