I love small batch brewing.   Most of my batches now are 2.25 gallons.   I can make them on the stovetop, I can easily control temperatures.   I'm not outside brewing in the cold, or the hot.   And lets be realistic.   Small batch gives you more variety, more chances to brew, and makes you a better brewer.

So Saturday, I brewed up one of my all time favorite recipes.   Drew Beechum's Pliny the Toddler.   My recipe is not exactly the same,  Drew uses Maris Otter for half of his grain bill.  I just use 2 row, and a tiny bit of carapils.  Drew's Recipe is for 5.5 gallons, mine is for 2.5.  This recipe is all about that magical combination of hops.   It isn't overly hoppy, it isn't a hop monster.   It simply features that combination of hops that you get when you drink a Pliny.  But the alcohol is low, so you can have several.   Yum.

Mash in went perfectly.   Hit my numbers exactly.  But here is where i think I goofed up.  I decided to mash for 90 minutes.   No one was home, I was watching Dr. Who and Football.   An extra 30 Minutes? Sure, why not?  Because you overshot by 12 points that's why...  Unfortunately I overshot this beer gravity by 12 points.  Trying for 1.040, ended up at 1.052.   I guess I have to accept that the 82% - 88% I keep getting is not a fluke, and just plan on it from now on.   The gravity was higher than expected, so i changed from US05 to Nottingham for this batch.  I've used both with this beer, and both come out just fine. The Nottingham won't attenuate out as much as the US05, so the alcohol content will still be where I want it.  But it will also leave a little more sweetness.  Think the hops in this can handle that no problem.   As you can see with small batch, I do brew in a bag, and I do it right on my stove top.  So simple; a couple of paint strainer bags (1.97 each) a 5 gallon pot, and a brewing thermometer.  That is all you need. To make great beer. 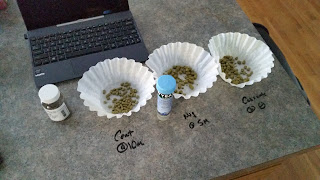 So here is a cool trick that I learned.   Write your hop additions and times on the counter with a dry erase pen.   Perfect way to keep organized,   just make sure it is a dry erase pen.  Cause... well it takes a long time to scrub off permanent marker if you goof.   ONLY USE DRY ERASE.  DON'T DO THIS ON WOODEN COUNTERTOPS.

Another reason to love small batch.   It chills in record time.   With my 25' stainless chiller, and a sink of ice water, I had this batch down to pitching temps in under 10 minutes.   Now granted the ground water here is getting colder every day.   And this day was Halloween, probably mid 50s outside.  But still 10 minutes is pretty darn fast. 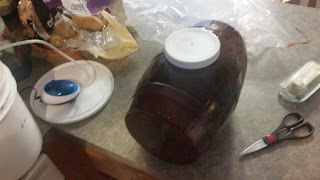 Aerated the batch like crazy and pitched 1/2 of a pack of Nottingham into it.     As of monday morning a slight Krausen has formed on the beer.  Should be rocking by the time I get home.  Sounds like I'm brewing with some friends this coming weekend. Gotta figure out what to brew with them. I'm pretty sure I should teach them all grain small batch.  I'm also pretty sure they will want to make a hop monster.   That should be a great time.   Got some serious bottling to do tonight.   The Scottish Ale will bottle up tonight, and the Centennial Blonde will be bottled.   Need to dry hop the Miller the Muggle Wednesday Night. Think Ill try Saaz and Hallertauer for the dry hop. Trying to give it just a little more character. I'm letting the old school lager, lager for a while longer.   There was a slight hint of butter, more in texture than flavor.   That is Diacetyl.   Rested for 48 hours, now back into the fridge for 2 weeks of lagering.

UPDATE: A Beautiful Krausen has formed.  creamy and thick

Posted by David Stelting at 8:29 AM