Well first of all thank you for all of your kind comments about mankind's email.   He was one of a kind.

Sunday we are brewing again.  It is a day on a weekend... so, yeah we're probably brewing.   On saturday I'll be bottling up the Miller the muggle.   People are starting to break into the good stuff, so I have to shield it with more muggle beer.   If you don't "get" the term muggle, it is from Harry Potter, and it means non magical people.   Miller the Muggle is a beer designed for my non craft beer drinking friends.   But I have to tell you, it is pretty darn good.  Sunday... we brew.   Wonder how we brew so much?   Simple, we brew small batch.

So here is a question... "what is the beer that got you into craft beer?"  I remember mine like it was yesterday afternoon.  It was a crisp fall day.  I had been doing some work for Dad at his home.  I was maybe 20 or 21, and I was dedicated to Miller Genuine Draft.   That is when it happened.  Dad came back from the store, he had some beer.   Some beer I had never seen before.  He put the beer in the garage fridge (a 1960s beast that was avocado green no less).  He said try one if you want.   The package said Sierra Nevada Pale Ale.  It was green.   It had magical pictures on   Pictures of a stream, and trees, and what I thought were pine cones.  "What the heck" I thought, "I'll try one". 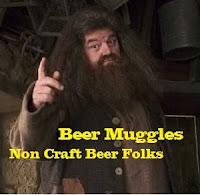 The world changed.  Everything stopped. And that one that one crystalline moment is burned in my memory.  It was bitter, and sweet, and roasty, and citrusy, and flowery...  It was all over.   Standing in that garage with the Kansas City Chiefs on the Radio I was hooked.   Now my tastes have changed and grown over the years.   But I still love SNPA.   We'll be brewing it this weekend.

One of my favorite things about no sparge BIAB is how easy it is to partigyle.   All you need is another pot.   So we'll be using the grains from the SNPA and some additional grains, and DME, and we'll be making an original recipe we're calling "the dankness monster"  We're basically trying to brew up a red colored citrusy pine forrest.
Posted by David Stelting at 6:16 AM