Brewing is fun.   It is fun by yourself.  It is more fun with a group of people who love to brew.  Saturday, I got to brew with some hardcore beer fans who want to become hardcore brewers.   These guys already have a great knowledge base for becoming brewers.   They have even completed some brews with extract.   Some were good, others not so much.  We started the day with some basic training.  Nothing to complicated.  Complicated comes when there is a problem.  As you have undoubtedly heard me say, "quit complicating everything". 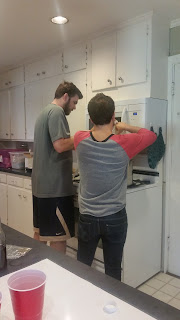 I decided the best way to teach them was to forgo extract and focus on small batch all grain.   If you haven't tried small batch, it is really a lot of fun.  Small batch allows you to make an all grain beer right on your stove top.  You can even do 5 gallons if you have to, by just splitting up the boil. We decided to do a zombie dust clone.  We did stovetop BIAB.  The decision to make Zombie Dust was made more simple by two prevailing factors.   1. We can't get zombie dust in Kansas City.   Because of the dominance of Boulevard, and some weird local liquor laws in KS and MO, we don't get a lot of the smaller craft beers here.  2. I wanted the guys to brew an IPA or pale ale that had enough hop power to cover all sins. Remember my basic philosophy that anyone can make a hop monster taste good.  It takes skill to make a balanced light ale.    So when I teach guys to brew all grain.  I tend to teach with a hop monster so they can have success.  And, let's face it... new brewers are almost always hop heads. 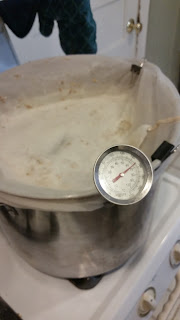 The day started well.  The water report indicated very hard water.  But the pH strips indicated water at 6.4 pH.   I was ready with acid, and brewing salts to modify the water just in case, but we didn't need to do much.   We added a little 5.2 just to buffer the water, and some gypsum just to enhance the hops and we were ready to brew. 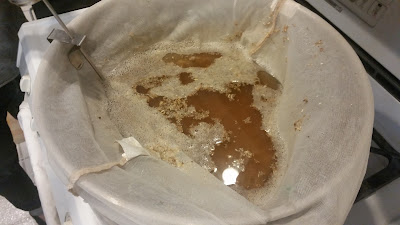 The mash created a beautiful golden, almost orange wort.   We left the lid on and stirred every 15 minutes.   We dropped to 148 after 45 minutes and had to turn on the heat for about 20 seconds.   Every time we stirred we tasted.   Mankind taught me to taste my mash.  To always think of this as cooking.   There is a point in the mash where the flavor changes.  A certain nutty bready flavor becomes prevalent.   That is what we are looking for,  I never know when it will happen.   Seems to depend on the grain bill, and the freshness of the grains.   But it is always slightly after full conversion, and it is the super secret key to great malty flavor.   I am actually talking with a major malter about this phenomenon now.  When I have more understanding I'll post more about it.   The change that happened between 30 and 45 minutes was awesome.  At 30 minutes the mash tasted like sweet oatmeal.   At 45 minutes, it tasted like nutty, whole grain bread with a hint of sweetness. REMEMBER BREWING IS COOKING.   Our preboil gravity was 1.052.  So we were close on the gravity. 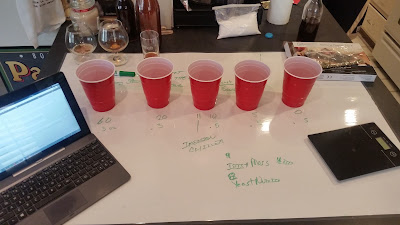 The boil was uneventful.   But I'll show you why you need a laminated poster for your brew day.  It is the best way to organize hops.  Just write all the times down with a dry erase marker.   We even added the times for the immersion chiller, and for the nutrients and the irish moss.   You can see my trusty computer, it's my constant companion on brewday.   After boil we were at 1.062.  That is a 84.5% efficiency.   Pretty darn good. 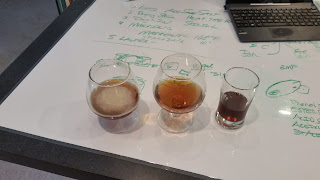 During our brewday we did a tasting of Boulevard's Bourbon Barrel Quad from 2014 and 2015, and compared those to a BSDA quad I just bottled about 2 weeks ago.    That is a fun thing to do during a brewday.  Taste great beer and discuss it with other beer fanatics.   I actually like the strong taste of the bourbon in the 15 it really fades over time.   Think a bourbon infused brew is in my immediate future... perhaps a  "Dragons Milk". 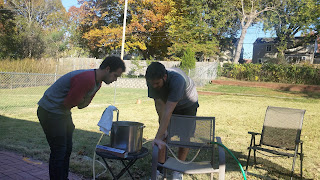 We chilled the brew with my small 25' immersion chiller. The break was insane.  We clearly had a great boil and breakdown of proteins.  M.A and John are checking out the cold break in the photo at the right.   It was truly impressive, I probably should have gotten a photo of it.  All wort chillers drip some, so it is a good idea to grab a kitchen towel and use it to contain the drips. 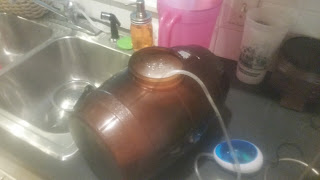 After aeration we pitched an entire pack of US05.  Yes this is an overpitch.  So what?  We rehydrated our yeast.   And we pitched the entire package.   It will be fine.  It isn't such a huge over pitch as to cause any problems.   It is monday morning now, and John reports that the Krausen was forming nicely.   Im sure it will be almost done by the morning.   It's only a 1.062 beer and we overpitched.  We also aerated for 25 minutes.   So this is a really healthy environment for yeast.    Dry hop in 10 days.   Then Bottle it up in another 4 days.   Yup it's that quick.   We'll taste first of course.  One of the many advantages of the small batch all grain in the LBK is that we can easily crash and taste.   If it isn't ready, we'll let it ride for a few more days then bottle.  UPDATE:  It's Thursday, The Krausen has come and gone.  Dry Hopping Tuesday, Into the Fridge for a cold crash on Friday, bottle saturday.  We'll probably force carb .5 gallons of this so we can try it immediately.

On another note.  My cider is ready for the bottle.   It has dropped clear, and should be fantastic by thanksgiving.  Which is what it is for.   So that is pretty cool.  Can't wait to have cider around the house all the time.  Think ill just keep making new every time I bottle.