All Grain Mr. Beer Oktoberfest Brew day "you can go all grain"

Here is my brew day for part 3 of 3 in my series on what to do with your old Mr. Beer LBK... otherwise titled "You can go all grain".  If you haven't read the other posts, you might check them out.

My next beers in the series will be called small batch partial mash / stepping stone or landing spot?... In that series Ill be arguing the benefits, and merits of doing small batches of partial mash.  The benefits are many but apply especially to; exotics that you don't really want to have a lot of,  super high ibu IPAs DIPAs and APAs , and finally as a learning tool for getting into all grain.  If you read the blog, you know I am a fan of partial mash.   In recent years partial mash has been losing ground, as more and more people are discovering the ease of BIAB.  I love BIAB, but partial mash just makes a whole lotta sense for a whole lotta brewers. I hope you'll check out that story line too.

Always be organized.   Always have your plan/recipe at your disposal.  Today was a frantic day.  My attention was divided.   It was the NFL kickoff.  I was watching the Chiefs play reasonably well.

This beer is being brewed with Wyeast 2112 Lager yeast.   And for you nay sayers... I say YAY, it is a lager yeast.  It is a strain of Saccharomyces Pastorianus, which is lager yeast.  So quit messaging me that it is a hybrid, because you read it in your basic brewing book.   The author was just trying to help you understand... not stating scientific fact.  It is an awesome yeast.  If you have the ability to aerate it, you can make almost any type of lager with it.  You could also use Wyeast 2124, or White Labs San Francisco Lager.  (Steam beer yeasts).  There are many, many strains of lager that ferment well in the active, or primary, phase of fermentation at 65 F.  But you have to lager them cold (secondary).

As you can see in the picture on the right, the mash is rising to saccrification temperatures. 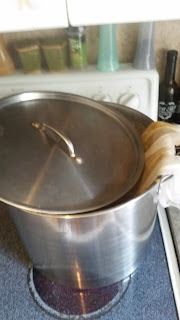 In this photo saccrification rest has been going for a while.   My thermometer reads about 2 degrees high.  So if you see that in my photos, just know that I do occasionally calibrate my thermometer.  If you haven't ever done that it is easy.  Just stick it in some ice water that is mostly ice, that is your low end.   Then stick it in some nearly boiling water.   Here where I live, water boils at 212 F.   If you live in the mountains it may be lower.

I realize the photo on the right is going to drive some of you crazy.  You have been told that leaving a lid on a boil, even if you leave it a jar, will cause DMS.  I have covered this in previous posts.   For now I will just say, hogwash.   I wont get into a long explanation again, Ill just say, that well modified grains don't contain a lot of the DMS precursor S-MS.  So as long as it can vent... you're fine.   DMS fear is a hold over from the days when malt wasn't well modified.

My pre boil gravity was 1.049... which means I got 80% efficiency.   So don't believe the knuckle heads who tell you BIAB is not as efficient as 3 vessel.  You can see the proof right on this page. 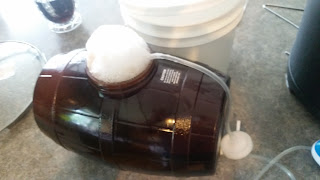 I think I nailed the color.  The cold break was great.   If you look closely you can see it down in the pot... It looks like a cloud, or an alien brain...  At the right is the LBK with the aeration stone rocking. The key to the steam yeasts is aerating the heck out of them.  I aerated for about 25 Minutes. 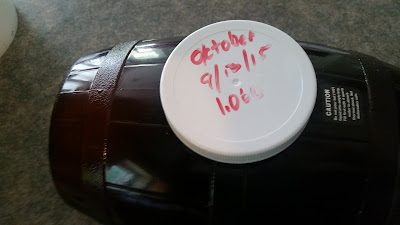 I use a dry erase marker and write on my fermenters.  Yes, it will stain your fermenter or lid.  Yes... I don't care.   It helps me remember dates.

This has been a very fun series.  I know I am going to keep brewing small batches a lot in the LBKs.   For me the current plan is 1 or 2 five gallon batches, and 3 small batches a month.  That should be just about the right amount of beer, and it will mean I can keep brewing every weekend.

Keep on brewing,  and keep sending your comments and questions.    This was the first of two beers I brewed today...  The second a Belgian Dark Strong Ale, Partial Mash, No Chill 5.5 gallon... (wow beer nomenclature is getting long) I will post about in a day or two.

UPDATE ON THE OKTOBERFEST:

The beer was so well aerated that it developed an awesome Krausen with in 18 hours of brewing.   It is humming along fine.  I can see the bubbles popping, but I don't see new ones forming.  So I think we are reaching the end of primary in only 5 days.   But this is Wyeast 2112, it will sit here for another 16 days.  Then cold crash, then bottle.  So in 1 month, I will be drinking awesome homemade Oktoberfest... only a month later than I should have been.

I will re use this yeast cake for a high gravity premium american lager.   Champagne lager... 1.060.

Posted by David Stelting at 8:51 PM