UPDATED: You can go all grain LAGER with your Mr. Beer fermenter... Standard American Lager 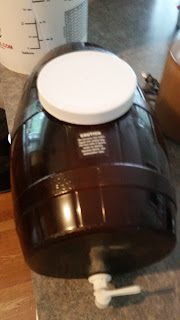 Part 2 of my 3 part series on going all grain with your Mr. Beer Fermenter. The basic premise of these 3 posts is that if you have a Mr. Beer LBK (little brown keg), a Large Pot, a thermometer, and some paint strainer bags... all things you should have if you are already a home brewer... you can brew all grain beer and ferment it in your LBK.   I have to tell you these brew days have been so fun and easy.  I think Ill keep doing them... Even if you don't have an LBK... you can usually find a Mr. Beer kit at a garage sale for less than $10.00   I happen to know the guy here in town who buys them from a certain major box store.   When the new ones are coming in he sells me the old ones for $8.  Complete Kits.   The LBK (little brown keg) is only $ 10.00 on line plus shipping.

Lager.  It is the hurdle many home brewers never cross.  Even if they have temperature controlled fermentation for their ales.  There is something about Lagers that brewers think is complicated and too difficult.  Well I am here to tell you... that is not true.  Lagers are not more difficult than ales.  Especially if you own a LBK.   There is a common misconception right now that to lager you have to be able to ferment the entire fermentation cycle at 48 - 58 F. In fact there are many recipes that call for primary fermentation at 65 F, brewingwithbriess.com has a number of them, alabama lager being my favorite.  I see recipes all the time that call for chilling to around 55 before you pitch your yeast, as if a 70 F wort would kill your yeast and / or ruin your batch.  The truth is most lager yeasts will ferment just fine at ale temperatures.   But they will also throw off some "off" flavors.   But relax and don't worry... I have a solution.  The solution is a LBK and a fridge.

This is how I make Lagers with the LBK.  I primary ferment at about 65 F.  When primary is over the LBK goes into the garage fridge at 39 F for weeks.   3-5 weeks.   3 days before bottling I bring the beer out and let it rise to room temp for a 24-48 hour diacetyl rest. Then back into the fridge for a cold crash (or a crash with gelatin fining), bottle drink repeat

Its Friday night brew session.   One of the hobbits had her 10 year old birthday party on Friday night. The tradition is to take the birthday girl and a few of her friends to a hotel with an indoor water park. One of the other traditions is that Mr. Dave stays home.   On this Friday night, that meant it was time to brew a lager. 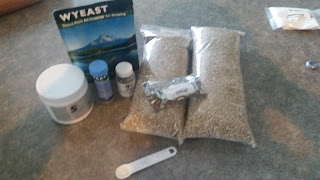 My ingredients are laid out and organized.   As you can see I use 5.2 pH stabilizer when I brew all grain or partial mash.   I have read some controversy over the effectiveness of this product recently.   To me the controversy is dumb.  Old school brewers are suggesting that you should use one of the acid blends to adjust pH rather than 5.2...they argue acid is more effective... blah blah blah.. really  the old school guys will just find any reason to argue about new techniques.  As if the brewing world was a secret fraternity guarding some arcane lore and knowledge.  "We'll tell you how to control your pH... but first you have to take this knife and sacrifice the goat by the alter in the forrest".  Here is what I know.  5.2 pH stabilizer works.  My efficiency has climbed into the 80s on average since I started using it, and my hop aroma and flavor lasts way longer. Update, one guy claims 5.2 pH makes your beer "salty", uh... well "how much did you use?"  and further... it's not that kind of salt. 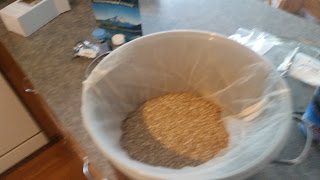 If you are a BIABer, this is the easiest trick in the world, use another pot or a bucket to add your grains to your bag.   Your SWMBO will thank you and your brew day will go so much easier.  As you can see, this isn't a lot of grains. Only 4 lbs.   That is another advantage of brewing small batch.   No matter your financial circumstance... you can always afford to brew a batch.

That's it, it is that easy to do a step mash. 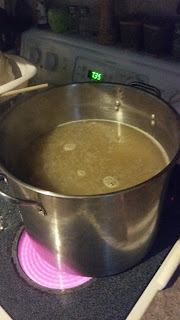 Coming to the boil.  This is a 5 gallon pot,  as you can see there is plenty of room in it.   The trick if you have a ceramic stove top is to set the pot over two burners.  That way neither will overheat, and both will stay on.

I used a hop bag for my hop additions.

I did not chill this batch.  I rarely chill down batches that aren't super hoppy.  I just don't want to waste the water.  One planet, one chance...

Now here is the big secret about lagers at ale temperatures.   You have to aerate the heck out of them. The following is a true statement,  lager yeasts are not meant to ferment at 65 F.   The only way you can do it and avoid off flavors is to make sure they have loads of oxygen and nutrients to multiply with, and pitch an adequate amount of yeast.   1 package of Wyeast Czech Pils into 2.25 gallons is adequate.   So I aerated with my trusty aquarium pump for 25 Minutes.  It is a foamy foamy wort when the yeast is added.

It is Sunday after church.   The yeast was pitched yesterday afternoon.  There is a considerable krausen on the beer.   Active fermentation has begun.   In 7-10 days this one will head to the garage fridge.   By thanksgiving we will be drinking it.  Fresh american lager for thanksgiving.   That will be wonderful.  update: 9/8/15 the krausen is active and 1.5" thick.  Seems very healthy. 9/10/15 The krausen continues to be active and appears very healthy.   Update on Update... yeah... this beer didn't make it to thanksgiving.   It all got consumed... ooops.  But it was so good. You would have drank it too.

By the way... let me sneak in three bonus items for those of you that made it to the end. 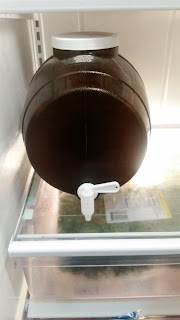 The fermenter transferred to the fridge after 10 days at 65 F.   I couldn't help but open it up and smell it. Absolutely NO off aromas.   I know it's a risk... but not much of one when it is going into the fridge at 35 F.  Really looking forward to drinking this beer later in the fall.  It will be in the fridge for 3-5 weeks?  How do you know when to take it out.   Simple, if you have a hydrometer, draw off a sample and check it.  That is easy with the LBK.  It has a spigot.   If you don't have a hydrometer, leave it for 5 weeks.

I got quite a few comments (3) from Tommy Knowitall.  I'm sure you all know him... he comments on your facebook posts telling you you're wrong.   Tommy is convinced (after reading a couple of basic brewing books) that this approach will not work.  I let him know, that not only have I been doing it on a larger scale for almost 20 years,  both Fermentis, and Wyeast have now consulted on this approach and said it should work fine.   Is it the very best way to make a lager?  No, probably not.  Does it come out clean and crisp every time?  Yes, it does.   And it is an easy way to make a lager if you don't have dedicated fermentation control.  Prost!
Posted by David Stelting at 10:55 AM