Pliny the Toddler... Again... and is Centennial Blonde the best house beer ever?

So I know I brew it a lot... some would say too often.  But if you haven't tried Drew Beechum's Pliny the Toddler.  You should.   It is reminiscent of Pliny the Elder but it is a session beer.  So you can have more than one with out worry of a DUI or a myriad of other bad decisions that come with excessive consumption.

If you don't know who Drew Beechum is, you should.  Drew is the co author of Experimental Homebrewing. (along with Denny Conn).  They also host a new pod cast, which is great. 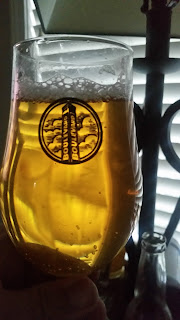 Drew though to himself one day,  "I wish I could have that Pliny combination of hop flavors, but have more than one".   He developed a recipe.  The original recipe is on the Maltose Falcons brew club page.   But there is also a version on the AHA website.   Like many recipes this one has changed a bit for me over time.  Drew calls for Maris Otter and 2 row.  I just use two row.   Drew calls for some table sugar.   Honestly, I haven't added it because my efficiency keeps going up and up.  So, although i know it would help dry out the beer,  I haven't been able to add it.   One myth about BIAB is that it is less efficient than 3 vessel.  I haven't found that to be the case, quite the opposite in fact.   With correct water and a fine crush, my efficiency has actually skyrocketed into the mid 80s consistently.  (and the malty flavor has increased).  Drew doesn't call for dry hopping, but I dry hop with Centennial, Cascade, and Simcoe.    You should definitely give this recipe a try.   I am literally sad when I run out.  I spend 20 minutes trying to find another one last night.


(one of my brewing partners has started a blog.  Our adventures are further documented on his page.  The blog is new but the guy loves brewing.  I'm sure it will come to rival this blog soon.) thebordersbrewingadventures.

On another note. I brewed a batch of Biermuncher's Centennial Blonde recently.   I brewed it because it was the #1 recipe on Homebrewtalk.   I'll be honest, I didn't expect much.  It's just a blonde ale... kinda boring.  But I brewed it any way... wow was I wrong.   I tasted a sample last night.   Wow.  Not even carbonated yet but amazing.   Can't wait to try this beer.  I'll probably bottle up a gallon of it and force carbonate it tonight.  That way I can take it to our brew session tomorrow morning.
Posted by David Stelting at 7:54 AM