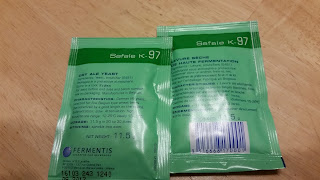 Saturday Mark Anthony and I brewed a Pilsner.  A crisp refreshing American Pilsner.  The penultimate easy drinking beer.   We used 7# (3.17 kg) of Weyermann Barke Pilsner (TM), and .5# (.22 kg)of Flaked corn.  The batch was hopped with 2 charges of Hallertauer at 60 and 15.   We were shooting for 25 IBUs and a gravity of 1.044.   A little hoppier than most American Pilsners, but that is what we wanted.  Crisp and reminiscent of a German pilsner.  There was only one weird thing going on, as far as we knew,  we were using an ale yeast by Fermentis called K-97.  More on that amazing yeast later. 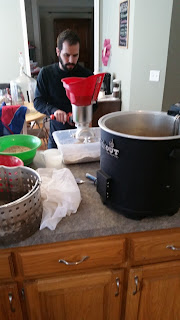 We crushed fine like we always do, I set the mill to a little more than the thickness of a credit card.   We doughed in low.  Having never used the malt before we wanted to give ourselves the best possible chance at success.   We step mashed beginning with a protein rest at 135 F (57C) for 20 minutes, then a slow step up to saccrification at 149 F (65 C) for 40 minutes, then a slow rise to mash out at 168 F (75.5 C) for 10 minutes.   The mash took a while, 95 minutes.  But we sampled beers, and discussed our travels, and plans.   We are about to brew some beer for an upcoming ethnic festival and there was considerable planning to do. There has been a lot of emphasis on speed in brewing recently.   My question for you is why?   Yes, excellence can take a long time.  Yes,  your brew day may last for 5 or 6 hours.  But many of you dream of "going pro" someday, so you can be assured if you ever do, you'll remember fondly the old 6 hour brew days. 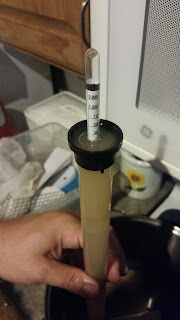 We tasted the mash at the beginning of the saccrification rest.  We didn't use iodine today,  because I need to get more.   I have said before, your mash takes what ever time it takes.  I stand by that.  Most mashes are done long before 60 minutes.  So we taste at 15, 30, and 45.   In this case at 40 minutes.   The mash tasted amazing.  I'll trust MA to make a comment to back me up on this.  Probably the best mash I have ever tasted.

That is when things got weird.  Our gravity sample was 1.039.   What the What?     We had overshot.  And I never miss my gravity.  Gravity samples are boring for me.   Listen, I'm not saying I'm the best brewer in the world.  I'm not a multiple NHC winner or even a state champion, I'm just a really experienced home brewer.  I hit my damn numbers.   So what changed.   The malt.   You see, for everyday pilsners, I am a fan of Cargil IdeaPils.  Good malt for single step saccrification. I Still use it, used it Sunday as a matter of fact.   But this, Weyermann was amazing stuff.   This is clearly a German Government Secret Malt.  This is nuclear powered pilsner malt, there can be no other explanation.   I just don't overshoot by that much,  even with a long careful step mash.     If you have access to Barke Pilsner (TM) by Weyermann I suggest you go get it.   Get all you can.   Mortgage your dog, make your wife give plasma... just get some.  The extraction and flavor are excellent.

But this day was really about a yeast experiment.   If you've read my previous post, you know I am a lover of clean crisp refreshing beer.  Not BMC conglomerate beer (although I respect them) something a little more flavorful.   But still very drinkable.   You also know that I have been searching for years for an easier method for making "lager like" beers.   Now, having said that I have the ability to lager.   I have a mini fridge, and a rudimentary temperature controller.   Soon, Ill have a chest freezer and 2 inkbird controllers.  So Ill have an ale chamber and a lager chamber.  But I still search for that perfect yeast that can make a lager like beer.   Today, we were trying Fermentis K-97.   K-97 has only recently become available to home brewers.   It has been used for years in commercial breweries. Safale K97 is an ale strain that when used correctly and at consistent correct temperatures will attenuate at or above 80%, and will produce very little ester, only about 23 ppm in a 1.074 wort at 68 F (20 C)  That is amazing.

To give ourselves the very best chance at a clean fermentation we made a starter, kind of... you see for years Fermentis recommended making a starter.  They said you could make it with sterile water or with a very low gravity wort.   The idea was to get the cell walls of the yeast pliable again prior to pitch.   But then the boys in the lab said,  "rehydration is not necessary with most beers" and confusion was instantly created.   I have a series coming up with Kevin Lane of Fermentis where this will be covered in detail.   At the beginning of brew day, we pitched the dry yeast onto a 1.035 starter at around 85F.   We let it sit as we made the beer.

By the time we were ready to pitch we had a fantastic yeast starter.   Easy,  if you can make beer, you can follow this method.   I'm pleased to tell you the beer took off and was forming a krausen with in 6 hours.   That is very similar to the performance I observe when I make a starter with liquid yeast.    Here is an easy way to make a starter.   4.25 Cups of water, 1 cup of DME.   Bring to a boil.  Chill to around 85F.   Pitch the yeast.  Do this at the beginning of brew day.

Back to the brew.   We made 1 ounce hop additions at 60, and 15 minutes.  The wort was amazingly clear by the end of the brew day.   We boiled in my electric turkey fryer with the lid on but ajar by about 2".   And again the obligatory, "no I'm not concerned about DMS, I have covered that adnausem on this blog... well modified malts, very little risk... blah blah blah...."  We made our hop additions and our other additions.  At the end of our brew day we chilled the batch, aerated,  and pitched the starter.   I for one cant wait to try this beer.  it is fermenting in a 62 to 64F (16 - 17 C) environment right now.

That's all for now sports fans.


http://www.fermentis.com/brewing/industrial-brewing/product-range/ yes I know it says industrial product range, but trust me, they have it for home brewers now too.

Posted by David Stelting at 7:03 AM