Friday Brewed an All Citra IPA with the crew Saturday Brewed my Stell"ale" a great brew days...hot brewing action photos at bottom

Friday was new years day.  Banks and Markets were closed all over the world.  The turbo charged, whirling gears, and clogs that are our modern world, all ground to a stop. And for  a moment there is peace in our crazy lives...  So, what else would we do but brew some beer.  On this day, an all citra hop IPA designed to be somewhere between Zombie Dust, and Pseudo Sue.  Trying to get the bitterness of Pseudo Sue with the brightness of Zombie Dust.

Recently I have been talking with the good people at Cargill.  Cargill is a US Based Grain company.  It is almost not fair to call them a grain company, their business model reaches into so many different sectors.  Luckily for us, as home brewers, it reaches into some of the finest malts you can buy.  Cargill is a dominant force in macro beer production.  But they are still growing in homebrew, and craft brewing.  If you type "Cargill homebrew" into a search engine, you'll find homebrewers every where trying to find their products.   They were kind enough to supply some malt for me to try.  And, boy did that malt perform...

After using their malts a couple of times,  I can now say... "go, young padawan, and find Cargill Malt at a local home brew shop near you".  This stuff is awesome.  It extracts like crazy,  The flavor of the malt was bready, and nutty, and sweet, and complex.  Awesome Stuff.  Will I exclusively use Cargill in the future?  No.  I'm still a fan of Rahr, and MCI, and Briess as well, but I sure will happily use Cargill when I can get it.  The point is don't limit yourself.   There are many great malts made by many great companies.   Try them, find the one that works best in your recipe.

Friday's  brew session was with out event, other than a little spill of grains... on a garage floor. Pre-boil, who cares... we scooped up what we could, we picked out anything we saw and we headed to the mash. The crew is getting good.  The brew was very good.  And we bottled up 5 gallons of Cream ale that is going to be amazing.  Although, Jake did note if this is an amazing beer it is going to be difficult to replicate what ever dirt and minerals were picked up from the garage floor.

Saturday, SWMBO went to a "married at first sight" marathon wine party.   So, I brewed again.  (And if she leaves today, to go binge watch the Kardashians with her friend "DameDrama", I'm brewing an apricot wheat beer.)

Saturday brew in detail.   Stell"ale".  My lagering capacity is full (1 carboy, Need to work on that). 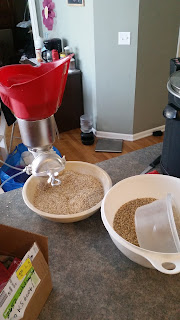 I ground my grains Old school.   The bid red funnel and the tall hopper will hold about 5 lbs of grain.   This recipe is only 5.8 lbs of grain.  So I didn't bother with the drill.   Just 5 minutes of good ol fashioned hard work.  I will admit my old arms do get tired when I grind by hand.  But there is something satisfying about grinding your grains up by hand.

The grist was perfect. I had set my mill to the thickness of a credit card. My advice for all brewers is get a bag and set you grain mill fine.  Even if you are a 3 vessel brewer.  Your efficiency will climb.  My efficiency with my 3 vessel set up is around 75%,  with brew in a bag I always get into the 80% region.   Sorry for the awesome photography of the grist.  I was boiling water to clean the brew kettle, so it was kinda steamy. 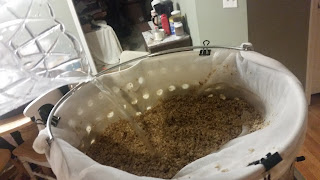 I sparged this one to a volume of only 6 gallons, not 6.5.  I knew I would be adding corn sugar dissolved in a gallon of water as fermentation slowed.   I began my boil with my lid on but a jar.  The boil is rigorous when I follow this method.  I never have problems with DMS and I have covered this issue ad nauseum on this blog.

At the end of the boil, I chilled, and shook to aerate.  Then I pitched re-hydrated US05 by Fermentis, you should really give it a try.  It is reportedly the famous "Chico" ale strain from a brewery in Chico California... It can be your go to yeast for almost all "clean" ale styles.  Styles where you don't want the yeast flavors to be more pronounced.

I realized I have become spoiled with my double coil chiller.  I only used the 25' copper chiller for this batch and chilling took 30 freaking minutes.  Back to the double coil next time.  I pitched rehydrated US 05.  And a calm but active fermentation had begun by 6 hours later.  I say calm but active.  Remember this batch was only 1.039 after the boil.   It isn't going to have a super vigorous amazing fermentation.

Tonight , I'm adding corn sugar and 1 gallon of water to the wort.  This is a great old school trick to use to help your beers finish out lower.  Don't add the simple sugars to the early part of the fermentation.  Wait until you have a big healthy colony of yeast in there.  Yeast will always eat the easy sugars first.  But if you give them the easy (simple) sugars after they are established, you will wake them up and get them munching again.   The result, they'll finish eating all of the maltose too... Boom! a clean, dry, ale... that tastes like a lager.   I'll update the blog with more pictures after I add the corn sugar.

Update:  it is 11 days later and this beer is done fermenting.  It tastes amazing.  It had fining added 2 nights ago and is currently cold crashing.   Still looks a little hazy in the carboy, but not in the hydrometer or the wine glass I use to taste.  So I'm bottling it up tonight.  I told you all how easy this beer is.  John and Jake both have tried it and assured me I am not crazy.  It really is excellent.

Update 2:  This beer is amazing.   There is the slightest fruity hint from the ale yeast.  Next go round well use K97.   But it tastes just like a stella.  Fantastic! brew it!

Posted by David Stelting at 2:24 PM