The end is near. .. la fin du monde clone 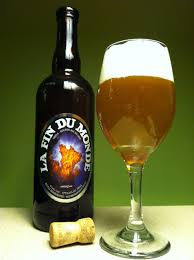 My first "la fin du monde", I remember it like it was the other day.   Not a clear perfect memory, like a memory from yesterday.  More hazy and romantic, like the memory of your first kiss.  We were sitting in a friends back yard comparing beers.  It was a cool summers evening,  there was a gentle breeze stirring the leaves on the patio.  The light from the candles reflected back off the underside of the outdoor umbrella made a golden halcyon cloister for our beer tasting.  My buddy Mike had brought a "Dragon's Milk" (which I knew and loved already) and a weird tripel from a Canadian Brewery.  Being a fan of Belgian Beers, and never having had one made in North America that I though was up to snuff (other than home brewed efforts)  I begrudgingly took a sample.   Boy were my misconceptions erased.  Erased with one sip of that flaxen honeyed elixir.  I was hooked.

I am a fan of Unibroue and especially of La Fin du Monde (the end of the world).   But I am not a fan of the $13 price tag for a 22 oz.  Here in Kansas City.   The solution... make it myself.    On Saturday, the brew crew and I set out to do just that.  Opting for a partial mash version of this beer.   We all love partial mash.  It is really an excellent method for home brewers.  It eliminates many of the variables that can screw up your beer.  I have already written several posts on partial mash.    Check them out if you want to learn more about it.

I ground the grains early brew day morning hoping for maximum freshness from our grains.  This batch of beer featured all Cargill Grains.  IdeaPils, and Wheat Malt.  Cargill makes some excellent malt.  But they aren't as prevalent in home brewing.  So ask your LHBS to get it for you.  I'm a fan of IdeaPils for everyday beers made from pilsner.  So I started early, but I wasn't the first one to start working on this beer.  John had already started the night before.  He started by treating 5 gallons of our needed 7.86 gallons of water with half of a crushed Camden tablet.   If you aren't pre treating your water, you should be.   High levels of chlorides can keep your yeast from attenuating completely.   Camden is an easy solution.

My fledgling brew crew is really getting to be good.  The brews we are making now are better than most commercial, and reaching competition quality. ( If you're unaware, competitive brewers make some of the best beer in the world.  So find one, and learn from them. )  We have learned a lot of things in the past 90 days, now we are learning about water chemistry adjustments.   We blended our tap water with distilled water an added back in the minerals we were lacking with additions of gypsum and Epsom salts.    Our pH was perfect at 5.2-5.3.  Remember this is a partial mash, so pH isn't as big a deal, but still damn good.

We step mashed this batch starting with a protein rest and then a saccrification rest at 154 for 60 minutes.  At the end of 60 minutes we added 1.5 gallons of 190 F water in which we had dissolved our DME.   This brought our mash to 168 F where we rested for 10 minutes.  We then sparged with a little over a gallon of water to go to volume.  We were at 1.055.  A little low, but we still had 2# of honey to add to the boil, and evaporation from the boil..  Sytrian Golding hop additions were at 60 and 15 minutes.   The color was amazing.  Our  sg for this beer... 1.084 exactly where we wanted to be.

At the beginning of brew day we made a vitality starter. Our new most beloved trick.  4.25 cups of water and 1 cup of DME.   Into this we pitched a package of S33 and T58.  Both Belgian strains from Fermentis.  I find the combination of the strains gives the more accurate flavor of the La Fin Du Monde yeasts. T-58 is peppery and spicy,  S-33 gives a touch of the phenolic belgian flavors. Neither is as "belgiany" as Abbaye.   The yeast vitality starter has the entire brew day to get going, and boy does it get going.   in 4.5 hours there was a .5" krausen forming in the Erlenmeyer flask.

We chilled the batch with both wort chillers, and even though it was February we were able to chill outside.  The batch chilled in 13 minutes, from 200 to 65.    We aerated heavily with the aquarium pump for 20 minutes.   Then pitched our yeast vitality starter.  And put on a blow off tube. And thank goodness, we did...

John reports that while he and his lovely bride were out for the afternoon,  The yeast took off like crazy.   By midnight he was thankful we put the blow off tube on.  He reports, on Sunday morning the following... "holy freaking blow off, bat man".


"The end is near tripel"

We also made some more mead.  Mead is easy to make.   And you have plenty of wait around time during your brew day to make a batch.  You really should give it a try.
Posted by David Stelting at 7:03 AM