The future of home brewing... Its in the bag!

If recent days have taught us anything, they have taught us that we live in a world that is changing faster than any of us could have ever imagined.   Facebook and Twitter are a part of our everyday lives, they weren't even around 10 years ago.  (Well ok, they were around but not like they are today) And 10 years ago no one had ever even heard of eBIAB RIMS (or HERMS).  I'm sure they existed but very few home brewers were using them.

Now it seems like everyone is building some behemoth system capable of cranking out home brew with the push of a button.   Bluetooth compatible, iPad controlled wort machines may be all the rage.  But I take a different tact. First of all, I don't really want push button beer.  I enjoy controlling the process.  I like the contact with my beer.  I imagine myself a wort whisperer.  I want to be the one to stir my mash and check it's temperature. I taste the mash.  Heck, I even enjoy decoction mashing. ( the SWMBO has a retreat coming up and I fully intend to fully nerd out and triple decoct a Vienna lager) I want to write it down in our brewing log, not have it automatically upload to google cloud. And I want everything to be simple and easy to clean.  (you cant clean what you can't see, and minor infections ruin good beer). 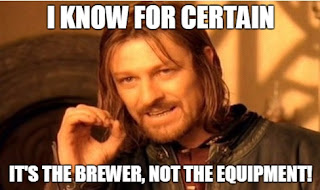 I know (not suspect KNOW) after 25 years that it is the brewer, not the equipment! I have tasted world class beer made on ghetto brewing systems! I will state quite arrogantly, I make far better beer than I can buy.  And for the most part far better beer than I have at club, or the LHBS.  (if you want to try my beer, come brew with us when you're in KC.you're always welcome and KC is a blast!)   I think part of the reason our beer (my beer) is so excellent is that we are in touch with our process.  So I try to keep everything old school.     So I avoid most of the new fangled technology up grades.   But there is one improvement I do not shy away from;

I think the most significant improvement in brewing, since I started brewing 25 years ago... it the Brew Bag. (the quality of malt extract being a close second)

I use a brew bag for lautering my grains no matter what system I am using.   And as I have said numerous times.  I have several systems.  This weekend, we will be breaking out the 10 Gallon, 3 Vessel system.  We need to get ready for summer, and that means we need to get some 10 gallon batches of August Hyppo Pale ale, and Johns Cream Ale ready.  I don't often post about large brew days on the blog.  This blog targets newer, and intermediate brewers.  But we do brew some more advanced stuff, some sours, some decotions, and some large batches.  Saturday, I'll let you all behind the veil at counterbrew studio 2 (John's house)  But even when I use the ol' system, which I am admittedly somewhat romantic about.  I wont be doing it with out a brewing bag.   Brewing Bags offer home brewers many advantages.

So, I don't understand why some guys will spend hundred and hundreds of dollars on an amazing false bottom, but wont spend $40 on a brew bag?   I have used bags from both of the major suppliers, they both worked fine.   They're both just tools for lautering.  When I started brewing we had separate lautering buckets.    We wold mash in a great big pot, then transfer the mash (grain and all) to a lautering tun (2 plastic buckets 6.5g and 5g).   The zappap lautering tun.  Still works.  But there are some of you that think the zappap is real brewing, and the use of a bag is sacrilege.  And folks that makes as much sense as mustard on a birthday cake!

A brew bag is no different than any other filter you use for lautering... except... they work better.  What ever drunk aussie thought of the brew bag... should get a medal and free beer for life!  They make everything faster.   "if they're so great why aren't commercial breweries using them".   My answer;  They are, or at least they are trying to replicate them.  I have it on excellent authority from a brewer at a major label that they are trying to add a permanent filtering medium to their experimental brew house.   Inspired by BIAB efficiency, they are working with an engineering firm trying to create filters inspired by this home brewing process.  And why the hell wouldn't they? Increased efficiency = increased profits.   And further who cares what they do?  We are home brewers, we have certain advantages over the big boys.  This is one of them.   So no matter how you brew, I suggest strongly that you work a brew bag into your system.   You won't regret it!

And here it is in action. 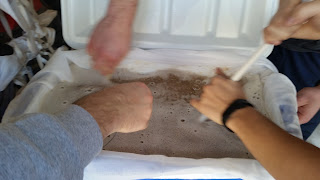 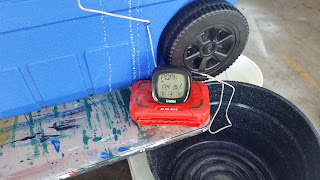 Posted by David Stelting at 8:12 AM