What the heck is a minor infection? 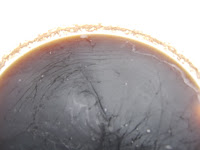 An infection is an unwanted growth of mold, bacteria, virus, or fungus.   Generally we call the genus of an unwanted infection a germ.   When mold, or bacteria is wanted we celebrate it and call it fermentation or culturing.   Bacteria, Mold, Fungus (yeast), and virus are neither good or bad.  They just are.   They don't want anything.  They are merely programmed to survive.   They have no agenda, they support no political candidate.   But for our purposes it is good to look at them as an active enemy that is trying to lessen the quality of your beer.

The variety and effects of minor infections is beyond the scope of this blog.  There are literally hundreds of potential minor infections.   The late Dr. George Fix talks about the role of minor infections in his seminal book "Principles of Brewing Science"  copyright 1999 Dr. George Fixx, and available through brewers publications.   He argues quite compellingly that post wort production of diacetyl and pentanedione are two of the most common flavor flaws in home brew.  Diacetyl tastes like butter, or butterscotch.   Pentanedion tastes like kind of like honey, but not in a good way. And further, that they are usually caused by minor infections.  There are other biological infections that can occur as well, but they tend not to be minor.  Infections such as common mold, film yeast (wild yeast), or Pediococcus (especially prevalent in keg systems that are not cleaned regularly).  Dr. Fix was a brilliant mathematician, and contributed considerable technical knowledge to the home brewing hobby.  Yes, the book was written in 1999.  But the point of the incredible scholarly research is still valid.   Minor infections are a major cause of off flavors in home brew.

So clearly a solution to minor infections must be found. 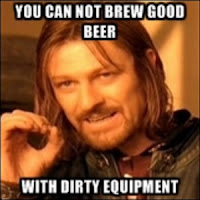 The late great Mankind (my brewing mentor) said, "if you don't like cleaning... you don't like making beer... you just like to make wort."   This was one of his many great sayings.   Now, I know many of you have taken um-bridge with some of Mankind's absolute rules of brewing.   But, his point is valid.   Making the beer, is fun and exciting.  Cleaning kinda sucks.   But the point is that you have to clean constantly to become a great brewer.

I am as guilty as the next guy.  I have been known to leave the dregs in a bottle on the counter for days.  I have been known to not clean my kettle until the next day.  And there is a rumor floating around that I almost never wash my brew bag on brew day.   So believe me this statement is not from a self righteous point of view,  you have to clean all of your gear before and after every brewing session.   Running Star San or PBW over and through your gear is not adequate.  Take out a soft bristle brush and get to work with your PBW, or Oxiclean Free.    Take your valves apart,  Get to work.  Consider it part of your next great brew.  The beginning of the next great recipe you are brewing.  Step one... Make your yeast starter, Step two Clean everything... 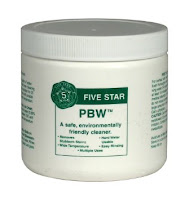 During fermentation, nothing touches my beer that hasn't been, soaked, in Star San rinsed, and soaked again. I am known to break down my thief, my auto siphon, and thoroughly clean my tubing.  A quick soak in star san is not enough.  You have to clean everything.


At the beginning of the next brew day I thoroughly rinse everything with hot water and star san.

Occasionally I give my kettle elements a long soak in Oxiclean or PBW... which ever I have on hand.  And I really go to town with my little brush.   I do this when I'm bored, and my carboys are all full, like last week, and I just really need to do something related to home brew. 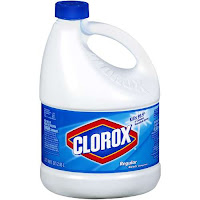 I don't use iodine/iodophor to clean.  But I know a lot of guys who do.   I don't want to stain my brewing gear.

I don't use bleach any longer either.  But for a stubborn system infection, or when trying to rehabilitate gear that was used for a sour at some time... you're going to need a bleach solution.   1 part bleach to 10 parts water for most instances.

Think it's overkill?  It really isn't.  It is part of brewing excellence.  Cleaning and Sanitizing are the first steps in brewing.   You should have these steps mastered before making yeast starters, or controlling fermentation temperatures.

Keeping your gear clean is one of the 3 big things that separates average brewers from great brewers. It doesn't matter if you brew with extract or all grain,  BIAB or 3 Vessel,  eHERMS, or traditional mash tun.   If you can master these 3 things... Cleaning and Sanitation,  Temperature Controlled Fermentation, and correct yeast pitch... you can make great beer.