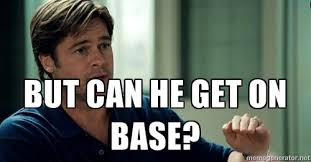 On Saturday, we struck out on our first at bat... but we understand the game.

So last week, I was here on the interwebs shooting my mouth off about how decoction is just a tool. A tool you can use to raise the temperature of your mash.  Talk about good timing.   This weekend we brewed twice.  One was always supposed to be a double or triple decoction brew day.  The other was supposed to be an easy, no stress, no sparge, session pale ale brew day "Pliny the Petulant".   But things happen...and if you understand what is happening, you can react to it.   If you don't really understand... and you are just following a recipe....well in that case, you get what you get. Fortunately, you are a reader of this, and other brewing blogs.  Fortunately, you know there is a way to raise your temperature, and improve the maltiness and clarity of your beer.  And that method is decoction.

UPDATE:  Pliny the petulant hops were less than advertised.  Not sure if it was our hop provider or the general decline in the quality of hops.  We solved that problem by adding 1 ounce of Simcoe, Cascade and Centennial, and dry hopping for another 5 days.  The bitterness is also too low.  We will solve that by using a bitter hop tea at bottling. I am beginning to suspect that something is wrong with either 1.) Where we are getting the hops or 2.) The hop crop in general.  More to come on this later.  I am looking into it.

It's such a little thing, when you are using a cooler as a mash tun, you have to preheat it.  And when the cooler is a cooler that has been sitting in a cold garage, you especially have to preheat the mash tun.   We didn't.   So when we mashed in at 160, our mash temperature fell to 146 F.   This is still firmly in the range for beta amylase enzyme activity.  When you are at 146 you are still getting all kinds of conversion.   But we wanted to be at 152 F.  So we were way low. And then John said..."well, why not pull a decoction?"  and you know that feeling of pride you get when someone you have trained or taught something, out performs you?    That's what I felt.   Of course John was right.  Of course he had actually been reading the blog.  He knew exactly what to do.  He understood that decoction is just a tool. A tool that you can use to raise your mash temp, add some color, get clearer beer, and maximize extraction.  He understood the game.

And so that is what we did.   We let it rest for a while at 146.  probably around 15 minutes. (15 minutes is long enough to get the enzymes and starches into the water).  Some brewers call this an enzyme flood/wash.  Then we pulled a thick decoction of 1 quart per pound.  Over the years the easiest way I have found to pull a thick decoction is with a stainless strainer. We scoop the thick mash into a pitcher that has clear markings at every quart and gallon.  We pulled 7.2 quarts for decoction.  That got put into the boil kettle  where it was raised to 156 F for a 15 minute rest.   At the end of the 15 minute rest we brought the decoction to a boil. Of course we stirred constantly through this entire process.  After boiling for 15 minutes we added the decoction back to the main mash and our temperature stabilized at 154 F. Where we rested until mash out.

Then end result... we overshot by a couple of points. (1.045/1.049) But we absolutely destroyed the proteins in the mash.   We will have a crystal clear beer when all is said and done.

A single decoction doesn't take that much longer than a traditional brew day.   Especially when you are just pulling the decoction to get to mash out, or to go from beta amylase rest to alpha amylase rest.  It improves your clarity.  It improves your extraction.  It does not add harsh or bitter tannins to your beer. One of the coolest things about being a home brewer is that you can use what ever technique you want to use.     So the next time you are too low on temperature,  I hope you'll consider using this old school technique.

Now to be completely honest about double and triple decoction brew days, they can suck.  Yes, you are connected to your wort.  Yes, it is kinda romantic.  But the mash will take as long as it normally takes to brew.   And I for one am not convinced that they add much more clarity, or extraction than a single decoction brew day.   So where does this leave us sports fans?  What is the right way to do this whole decoction thing?

In the past couple of weeks we have learned about step mashing and decoction.   I for one think too many all grain brewers have gotten away from these very valuable techniques.   It is baffling to me that so many brewers are spending so much money on wort production machines, but they are not taking advantage of these techniques.   I think that is because many of the brewers who are brewing now, never had to use under-modified grains. They never had to do a multi step mash just to make sure that they got good conversion.  The end result they don't  know all of the other benefits of  multiple temperatures in a mash.   So you can be sure there will be a series coming up on the mash as well.

That's all for now sports fans.

By the way the 1 gallon pink pitcher is our trusty brew day pitcher.  it is marked with quarts, and half quarts.   It cost $6.00 and has lasted for over 10 years of brewing now.