How to make a ridiculous dIPA; Part 3 Recipe design. with BSG Hoptonite dIPA 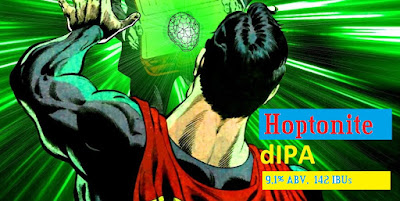 So now it is time to apply what we have learned in this series and design a ridiculous double India Pale ale.   Our goal is not to clone any particular dIPA but rather to be inspired by some of the dIPAs that we love. We are not nearly as concerned with IBUs as we are with hop flavor and aroma.  IBUs are a theoretical measurement of bitterness.   We want the beer to be bitter, but we are more focused on hop flavor and aroma, and definitely a tongue stinger.  I, for one, think this is a fundamental characteristic of a dIPA.  We want loads of hop flavor and aroma.  We want those aromas to be herbal, pine, citrus, black pepper, and a touch of stone fruit.   Notice I didn't say woody, earthy, floral or grassy.   Those are characteristics we associate with an English IPA.   We want the color to be very light for a dIPA 7.5 to 8 SRM.


Wowser, that is a lot of want's and things to consider.  So let's break them down and analyze them one at a time.
Again, we didn't want to copy another recipe exactly.  We wanted this to be our own Counterbrew / Turkey Creek / Mynd Spyn / Borders Brewing Adventure recipe.  Sure we could have just copied Pliny the Elder, or Headdy Topper.  And let me say for the record that is a fine thing to do.  I personally love Pliny the Elder.   I make it a lot, a couple of times during this writing of this blog. But this is our beer, based on our new and deeper understanding of the hops.  It is our hope that this new understanding creates a fantastic beer.

But now comes the hard part.

Figuring out the additions, the times, and the processes.   For that we turn to two sources to which I am proud to introduce you. (see I can use correct grammar)  First,  ScottJanish.com  hop oil calculator.  Scott is a great guy and very cerebral.  He has taken the time to build a free online hop oil calculator.  We have been testing it, and the predicted results match very closely the final product.  Now, you should know our hop bill doesn't fit into scotts calculator very well.  We  are using some hops that have not made their way onto the calculator yet.  No problem.  Not only is Scott cerebral, he is also a good guy.  He helped us choose the closest substitutions for the sake of his calculator.   The end result.  We will kinda know what the beer will taste like before we brew it.

Second, is good ol' expert advice.  One of the great things about home brewing is you can turn to people in your club, your LHBS, and to industry guys for help.   We will be planning our recipe using Brewtoad.com and Scottjanish.com.  And then sending our recipe to the experts at BSG just to make sure what the computer is spitting out will match what experience and expertise indicates.

ScottJanish.com is a beer blog.  Scott has done the research for you.  On ScottJanish.com you willfind the very best commercial clone recipes on the net.  A list of the top 200 beer blogs by reported traffic.  (Sadly we haven't made the list yet, but were almost there.) A list of great home brew recipes.  A hop substitutions engine, which is ever growing and expanding and, last but certainly not least, a hop oil calculator.   I don't design hoppy beers any more without consulting scottjanish.com.   The first beer was our hoppy wheat.  The hoppy wheat was barely posted about.  But we designed the recipe using the hop oils calculator, and as I sit here enjoying one right now, it occurs to me, the engine was right on the money.   We were trying to make a hoppy, citrusy wheat beer with some pine notes.  That is exactly what the engine said we would get, and that is exactly what we got.

But designing this recipe is a little more challenging.  The hop oil calculator does not have every hop yet,  Scott is doing his best, but remember this is just an amateur home brew blog. Not amateur in appearance or performance, just in the fact that it is not Scotts full time profession.  Since we were Using some hops that are not in the calculator yet, we had to find the closest substitution hop and plug that in.

When I first put the recipe in I was convinced of a hop schedule that featured Nugget as our bittering hop.   Nugget fit the bill.  I was sure of this fact.  But, I have come to trust Scott's hop oil calculator.  And when I put in my hop bill I got something that looked like this...Mild and pleasant with spicy floral tones.... what the what?   I'm trying to make a tongue stinger.   A tongue stinger that features very lemony, citrusy, pine, and black pepper tastes.  Here was my first attempt. 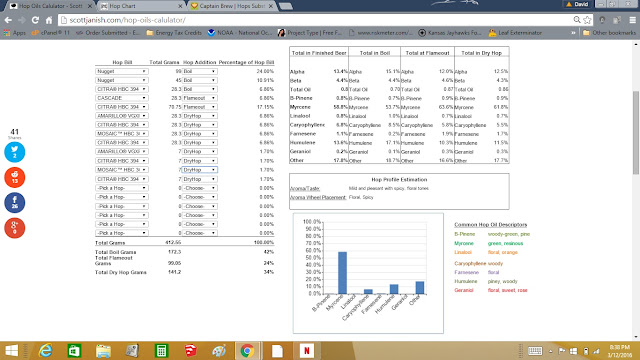 That is not what we were trying to do.   Mild and pleasant?   What is this the Lawrence Welk of beers?    We want interesting and cool.   We want flavors you can identify when you drink the beer.  But that is the cool thing about ScottJanish.com.   It allows you to test your recipe before you brew.  And based on the knowledge we have accumulated about hops, you can adjust your recipe.  Which I did.  Here is the second attempt. 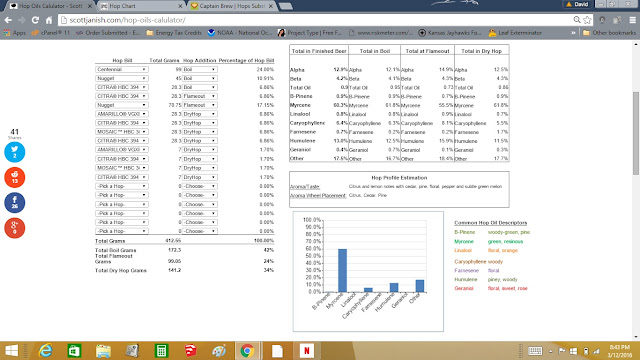 Citrus and lemon notes with cedar, pine, floral black pepper and subtle green melon.  "Hello! yes please Ill have two of those, and get the dame a cosmo please, thank you!"  That is exactly what we wanted.   So that is what we are going with.    Just to make sure, before we brew, we will be running this by some experts at BSG.  But I think you all get my point.  What a cool resource.  One little change.  Changing the initial bittering charge to Centennial makes all the difference.  And isn't it cool that we live in a time where we don't have to just keep making the same beer over and over to figure that out?
So now our final recipe looks like this.
5.5 Gallon Batch.   Yield 5 gallons.
OG - 1.081
FG - 1.012
ABV - 9.1%
IBUs - 142 - yup 142 percieved IBUs but total AAUs of 160.85  (Pliny is 199 percieved IBUs and 152 AAUs)  So this is an insane hop monster. 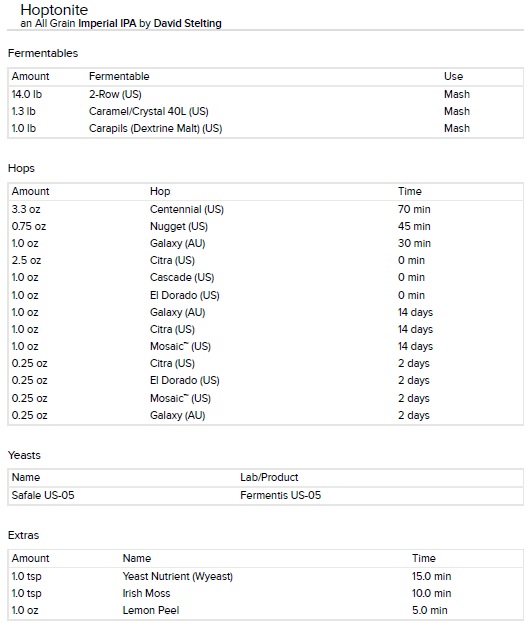 The mash is a simple 60 minute rest at 150 F.    We will certainly do a no sparge for ours, but you brew it however you want to.  You could even make this as an extract.  There is so much hops in this that you really wouldn't notice much of a difference.   We wont be mashing out, or sparging, or step mashing or anything complicated.  Just straight forward hop attack.   That is it.  Nothing more to this one.   It is all about the hops.  We will be turning on our Jaded Hydra right at after the flame out additions go in.  We will be under 140 F, in under 2 minutes.  The 2 day dry hop is not a typo.  For the final dry hop we don't want to expose the hops to any yeast activity.

Next stop Brewing the beast.   But before we brew, remember we are running it by our experts.

So that is it sports fans.   A true hop monster.  But a hop monster developed with thoughtfulness and technology.   I am not saying this is the final version of the recipe.   I am sure we will make adjustments and modifications as we brew this beer.  But for now, this is our version of a double IPA. The brew day photos and videos will have to wait a while. As we are all very busy right now.   With family coming into town, work travel, church, and school activities.   I for one can't wait to brew this beer.   We will also be making my "by Grace" IPA in the near future (the best IPA I have ever tasted, an entire 5 gallon batch disappeared at just 2 cast parties)  and John's cream ale.  It is a fantastic summer beer. Thank you for your comments and questions.   I hope you will also brew this beer, and tell me what you think of it.

If you need an extract version of the recipe.  Just substitute the entire grain bill for 9.9 lbs of Light Liquid Extract (not pilsen or Maris Otter, just standard extract) and 2 lbs of extra light DME.   We are working with a home brew supplier to bring you all pre packaged versions of our recipes.  More on that to come soon.

UPDATE:  The good folks at BSG think our recipe looks good, and want to try some when it is done. We'll make sure they get to.

UDATE 2 Hoptonite will have to wait for a couple of weeks.  Easter is coming fast.  We have convinced our SWMBOs to let us brew on Holy Saturday, but it has to be fast.  So were doing a 10 gallon no sparge Saison.  Hoptonite will not be a fast brew day, every detail will be checked and re checked when we brew the monster.

UDATE 3 Hoptonite is about a week old.  It is chugging away in the FC.  The whole basement smells like hops.  We had a slight blowoff, and by slight I mean it took over an hour to clean up, so use a blow off tube and a large bucket.    Cant wait to taste it.

Posted by David Stelting at 1:30 PM