So where are we now? The near future of home brewing.

My how things have changed.  In 25 years of home brewing I have seen so many changes.   When I started home brewing almost everyone did extract.  A few guys did all grain, and we revered them as rocket scientists.  They had all kinds of weird gear and cool toys.  They spent half of a Saturday making a batch of beer, and they kept talking about "diastatic power".  (still very important, although no one really talks about it any more)  They used fancy terms like "acid rest" and "phytase" and "beta amylase".  All terms that blew the mind!

Eventually I met a guy who promised me that "it isn't that hard, they make it seem hard to feel smarter... programming your VCR to record Letterman with out missing the top 10, that is hard".   He taught me all about all grain brewing.   He taught me how to mash grains. He taught me a lot about common sense science and that understanding the science is more important than following a recipe.    But our equipment was rudimentary,  we used a large enamel pot to mash and boil in.  A stainless steel spaghetti pot and a large soup pot were used as the hot liquor tank.  He did have a turkey fryer with an aluminum 7.5 gallon pot.   We transferred the mash to a zappap lauter tun to lauter our mash.   We were fancy boys, so we had a plastic spigot on the zappap. (rather than a vinyl tube that was affixed with silicone caulk)

I have to wonder what he would think of the new home brewing systems if he were around today. What would he think about $20K home brew systems, or even $5K systems.   I like to think he would say something about "spending money on things that don't improve your beer, is like shaving a goat.   Moderately satisfying for the goat, but a waste of time and money for you" But, I know he would like the all in one systems, and he would love Brew in a Bag.  He was always looking to simplify his brewing procedures.  He coined many of the phrases I iterate on this blog.  In the end I know he would follow the science.   And if it made his beer better, or the same and easier, he would embrace it wholeheartedly.


So it is with that back ground that I look at where we are now, and I try to predict where we are headed.  I'll use what I was taught.  Because that is what I know.  And because his beers were among the best I ever tasted.  Still trying to get a Scottish wee heavy that compares to his.  So with that frame of reference,  here are my predictions for the near future.

I think for the immediate future, Brew Bags are going to become the norm in all systems.  As you all know I always use a brew bag.  Even when brewing 3 vessel with batch sparge.  They are simply better at lautering.  It is a better filter medium.  And just like we no longer use separate mash and lauter tuns.  I think very few brewers will be using false bottoms and bazooka screens in the near future.   But, for those of you who like complication, technology (always cool) and durable stainless metal products.  I think that Stainless Steel mesh filters will come to replace bags.  They are even easier on brew day.   And they do an even better job lautering than the bag.  They don't ever slip down, or slump and allow some grains into the wort.

I think we will see the price come down on all in one systems.   And I think we will see advances to make more of the 110 V systems the norm.  I also predict easier control of the units with phone applications.   I know many of you love your complicated diy control panels and I will admit they look cool.   But I think we will see simplification and ease of use.

I also predict advances in 3 vessel brewing to catch up with BIAB and all in one systems.   We've seen some.   Heat Exchange Recirculating Mash,  Recirculating Immersion Mash,  But those systems are pricey.  I am aware of an affordable Recirculating Mash system that is being developed.  It uses a cooler and keeps your temperatures exactly where you want them. It will market for only about $350.00 - $400.    That should be huge, if the guys can get it to the market. 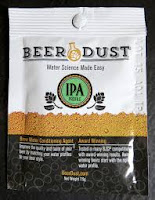 On the water adjustment front.  I predict more simplification and advances. We are already seeing products like Beer Dust and 5.2 pH stabilizer that make brewing water chemistry additions easier.  But more importantly we are seeing software advances like Brunwater, and EZ Water.   Both of which are free ware, and both of which can help you plan your brew day water chemistry adjustments.   I predict tubs of different water adjustment that can adjust water by general style.

I predict that methods to reduce contact with oxygen will become common place.   I think guys will transfer to kegs more and more with co2 pressure rather than with gravity.  And at a minimum,  I think guys will devise ways to transfer that minimize oxygen contact with nearly finished beer.  I for one like to lay a blanket of CO2 on top of my bottling bucket right after I add the priming sugar.   I don't know for sure that it helps, but it certainly can't hurt.

I predict more no sparge brewing.   Although my mentor might not like it, it is a great method, and produces beer on par with sparging.  Everything that saves a home brewer time and improves beer is a great advance.  In truth I think if the beer was just as good, he would love no sparge brewing.  Anything to make brewing easier.  I personally think he would be doing no sparge BIAB if he were with us today.  Check out Don Osborn's video on no sparge  brewing. In fact, check out all of Don Osborn's videos, they're great.

Finally I predict a return to more connected brewing.   More 3 vessel, more decoction, more step mashing.   Home brewers brew for fun.  And although we all dream of going pro and taking down INBEV/AB/SABMILLER , the reality is brewing costs us money.  We do it because we love beer, and we love brewing.   And brewing on the totally tricked out computer controlled systems is... well... kinda boring.   Guys want to brew, to be in contact with their mash, and their wort.  Some guys even want to source local ingredients and capture local yeast.  Who am I to say they are wrong.  It is all about having fun and making great beer.   I have warned you all that when 3 vessel seems more fun to me I'll switch back to 3 vessel.  And truthfully, I have been doing some 3 vessel recently.  And it has been fun.  But I also love my partial mash process and my countertop BIAB process, and I get to do even more cool stuff with those processes.  So when brewing at home Ill probably stick with that.

That's all for now sports fans.
Posted by David Stelting at 8:35 AM