The hop series will continue this week, and the yeast series will also get going strong again later this week or next.  When you are working with experts, you work with their time lines.  And not surprisingly, they are busy people. 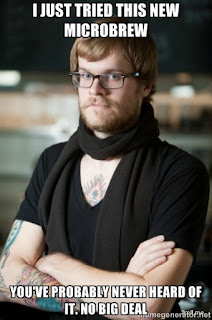 Brown Ale.   Simple Malty brown ale.   A wonderful beer for every day consumption.  There was a time when brown ale was all the rage.  Every where you would go, you would see brown ales.  But with the growth of the home brewing scene and the craft brewing scene many of the old classic styles have gotten put on the back burner.   Shoved aside for the newest taste explosion.   Forgotten for the latest double India chocolate nib saison aged on bourbon barrel chips in a chardonnay barrel and fermented with Saccharomyces eubayanus.  In the quest to capture market share craft breweries have looked to make more and more interesting, and hoppier, beers.  This trend has even perverted the simple brown ale.   It is hard to find one now with out coffee, or peanut butter.  Overall, this trend is a good thing.  None of us would have ever enjoyed so many of the great beers of the last 10 years with out this trend.  But,can we still enjoy beers that skinny jean wearing, self absorbed, sycophants would turn their noses up at?  Can we just have a simple well crafted malty brown ale?

Brown ale is one of the best styles for home brewers to brew.   It is medium OG, malty, complex, not too bitter, and easy to brew with success.    This is a beer you can enjoy at any time, even in the summer.  It is malty, but not too roasty.  It is balanced but not overly hoppy.  There is a residual sweetness but it isn't cloying.   If you have a friend, or a loved one, or a SWMBO that doesn't like dark beers, this is the beer to give them.  This is the beer that can help them understand that a dark color does not always mean overpowering roasted flavor. 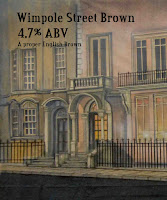 I really enjoy Fat Squirrel by New Glarus, and Moose Drool by Big Sky.  But my favorite brown ale, is made in my kitchen.  So today, I will give you my Northern English Brown Ale recipe that I have been brewing forever. I have probably brewed this beer more times than I have brewed any other beer.  If you were to survey friends of mine who have tried my beer, this is probably the beer they would conjure in their minds.  It has converted many muggles to craft beer.   I hope you will try it and enjoy it.  Wimpole Street Brown Ale.  Wimpole Street is in London.  It is the home of Professor Henry Higgins, Eliza Dolittle, and of the poet Elizabeth Barrett Browning.  Wimpole street is 2 blocks from Baker Street home of Sherlock Holmes.

Mash grains at 154 F for 60 Minutes.
Ferment Cool,  64-67 Fermentation chamber.  (the yeast is very forgiving and you want some esters so if you cant control fermentation temperatures you'll be OK fermenting in a cool dark place)

With a simple change of hops and a quick wort souring, this beer makes an amazing base beer for a sour.  It becomes an Oud Bruin.  (Old Brown)   Another style that I love.   I'll post about that soon as well.   If you can make 10 gallons of beer at a time you can easily make enough wort for both styles.